No end to ‘Yolanda’ victims’ woes 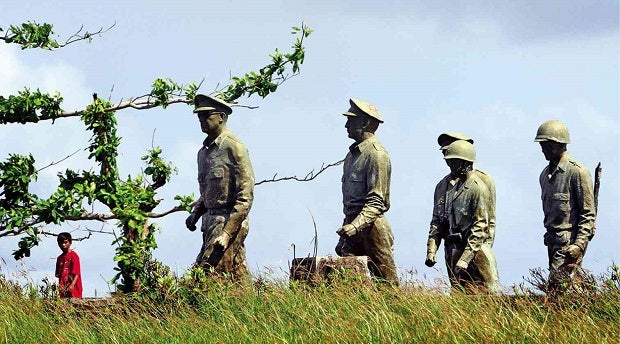 SIGNS OF LIFE The figures of the famous MacArthur Landing Memorial Park in Palo town, Leyte province, seem to come alive along with the trees and grass, which have started to turn green almost two months after the devastation caused by Supertyphoon “Yolanda.” NIÑO JESUS ORBETA

Rains that have been hitting parts of the Visayas since the end of December are “testing the resilience of communities” ravaged by Supertyphoon “Yolanda,” underscoring the need to boost early recovery programs in the disaster zone ahead of the onset of the wet season, according to the United Nations humanitarian office.

In its latest situation report released on Jan. 2, the UN Office for the Coordination of Humanitarian Affairs (Ocha) also said the United Nations and its partner agencies were focusing on providing shelter and reestablishing livelihood for the typhoon survivors.

“Rainfall has displaced 54 families in Capiz province in Western Visayas and resulted in mudslides in Tacloban City. This reinforces the need for partners to bolster programs and support early recovery in advance of the upcoming rainy season,” the report said.

Mudslides that the rains had triggered blocked major roads in Tacloban “for a few hours” on Thursday, it said.

It also cited possible health risks that debris and improperly managed waste might pose on residents “as the rains increase in the coming weeks.”

“The recent rains emphasize the importance of strong engagement to promote a smooth transition to early recovery, particularly in shelter and debris clearance programs. Concurrently, humanitarian partners are actively trying to encourage private companies to become involved in waste recycling and mobilizing trucks and heavy equipment,” the report said.

Ocha said efforts were now focused on providing short-to medium-term shelter for some 4.1 million displaced people across the Visayas.

Humanitarian workers are currently identifying sites for the construction of bunkhouses and selecting beneficiaries, it said.

Cash-for-work programs are also going on, with some 290 activities either on the pipeline, being carried out or completed.

Efforts are also under way to process felled coconut trees, which may degrade or rot “in the next two months,” the report said.

A shipment of more than 500 chain saws is coming this month for distribution to villagers in worst-hit areas to process lumber out of trees felled by the typhoon, according to the Office of the UN High Commissioner for Refugees (UNHCR).

Expected to arrive at the relief hub in Cebu province between Sunday and Jan. 14 are 38 12-meter containers loaded with shelter materials, clothing and chain saws for distribution in the worst-hit communities.

Bernard Kerblat, the UNHCR representative in the Philippines, said the second phase of the response would begin this month with the distribution of relief supplies by sea.

The first phase was rapid distribution of aid by air during the early part of the emergency.

Kerblat said the fresh shipments included 30,000 pieces of plastic sheeting and as many blankets, 1,500 mattresses and bed sheets from the Swedish home furnishing company Ikea and clothing for 800,000 people from the Japanese clothing company Uniqlo.

“We will not be able to serve the entire population [so] we will concentrate on the most vulnerable ones,” Kerblat said.

“It’s a small initiative. It’s a drop of water. But all the drops of water pulled together make a river,” he said.

The fresh supplies are arriving just as the UNHCR has completed serving more than 300,000 of the worst-affected people in Eastern Visayas, 100 percent of its initial target for distribution of emergency aid, including shelter materials, solar lanterns and cooking utensils.

Kerblat said the additional supplies would be distributed on a “needs basis” and to get priority would be the most vulnerable, including people with disabilities, the elderly, women and children, indigenous people and another sector who should be given more attention: widowers grappling with guilt over the loss of their wives and children.

He said “very few people” noticed the plight of these widowers who were “overwhelmed” survivors of the deadly typhoon.

“They may also be providers to one or two children who may have escaped the destruction. And they are overwhelmed with the desire to go back to their traditional activities like fishing, to rebuild the house,” he added.

Kerblat said the United Nations and its partner agencies and organizations were looking for ways to deal with the situation of those men, particularly through providing them with livelihood “as early as possible.”

Ocha called for greater private sector support for the shelter and camp management sectors, saying in a Dec. 31 report that assistance there was “lagging well behind overall funding levels.”

The United Nations said donations from around the world—foreign governments, multilateral institutions, international organizations, companies and private citizens—now amounted to $608 million, more than half of which ($328 million) was contributed to the world body’s flash appeal for its Strategic Response Plan.

The plan is “closely aligned” with the Philippine government’s Recovery Assistance on Yolanda (RAY) program, the country’s long-term rehabilitation plan for typhoon-ravaged provinces.

Yolanda (international name: Haiyan) was the worst disaster to hit the Philippines in 2013, killing more than 6,100 people with nearly 1,800 still missing.

The disaster affected 14 million people, 4.1 million of whom lost their homes.