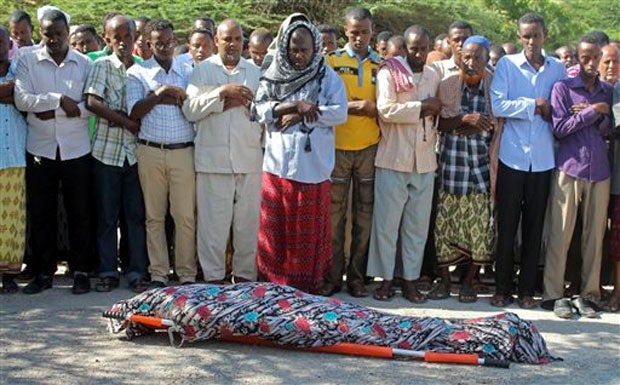 Mourners pray over the body of Somali journalist Mohamed Mohamud at his burial in the capital Mogadishu, Somalia. AP

NEW YORK—At least 70 journalists were killed on the job around the world in 2013, including 29 who died covering the civil war in Syria and 10 slain in Iraq, according to the Committee to Protect Journalists.

The dead in Syria included a number of citizen journalists working to document combat in their home cities, broadcasters who worked with media outlets affiliated with either the government or the opposition, and a handful of correspondents for the foreign press, including an Al-Jazeera reporter, Mohamed al-Mesalma, who was shot by a sniper.

Six journalists died in Egypt. Half of those reporters were killed while reporting an Aug. 14 crackdown by Egyptian security forces on demonstrators protesting the ouster of President Mohamed Morsi.

“The Middle East has become a killing field for journalists. While the number of journalists killed for their work has declined in some places, the civil war in Syria and a renewal of sectarian attacks in Iraq have taken an agonizing toll,” the committee’s deputy director, Robert Mahoney, said in a statement. “The international community must prevail on all governments and armed groups to respect the civilian status of reporters and to prosecute the killers of journalists.”

The New York-based Committee to Protect Journalists has been tracking deaths among reporters and broadcasters since 1992.

Most of the killings it has documented over the years involve people who are covering news in the places they live. That was the case, as well, in 2013.

Many of the deaths occurred during combat, or among reporters covering conflict zones, but journalists in several countries were also murdered after reporting on sensitive subjects.

Reporters and commentators who covered police misconduct, political corruption or drug trafficking and other sensitive topics were slain in separate incidents in Brazil, Colombia, the Philippines, India, Bangladesh, Pakistan and Russia.

A pair of Radio France Internationale journalists were abducted and killed after meeting with a leader of ethnic Tuareg separatists in Kidal, Mali. Militants in Iraq killed five members of the news staff of Salaheddin TV in a suicide attack this month on the channel’s offices in Tikrit, Iraq.

For the first time in a decade, no journalists were known to have been killed for their work in Mexico.

The CPJ is still looking into the deaths of an additional 25 journalists in 2013, not included in the tally of 70, to determine whether they had anything to do with their work.