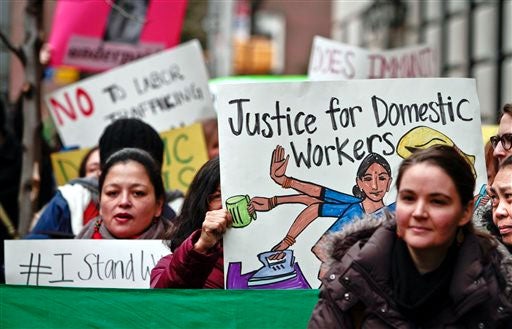 Members and supporters from a coalition of organizations supporting domestic workers, rally outside the Indian Consulate in New York where Devyani Khobragade, India’s deputy consul general was believed to be staying after she was arrested and charged with lying on a visa form. AP

NEW YORK—The prosecution of an Indian consular official in New York for allegedly forcing her maid to toil for little pay highlights a problem advocates say is all too common — workers for foreign governments who bring along the baggage of human trafficking to the US.

Because of the complications surrounding immunity laws, many abuse cases often go unreported or uncharged, advocates say. Victims’ claims often end up in civil court for that reason, they say.

There have been at least 20 cases in the past decade filed by workers who said they were brought to the US by diplomatic officials and threatened with abuse, forced to work endless hours and kept isolated, with their employers not charged criminally.

The case against Devyani Khobragade, India’s deputy consul general in New York, is unusual in part because the US State Department has said she does not have immunity, a claim her attorney and the Indian government are disputing. Khobragade, 39, was charged with visa fraud and accused of lying on a visa form by stating she paid her housekeeper $4,500 a month when she actually was paying her under $3 an hour — less than half the minimum wage.

Khobragade’s attorney Daniel Arshack has said that his client is innocent and that investigators made a critical error by misreading her visa applications, which were not fraudulent.

The case has prompted outrage and protests in India, where officials there say she is the innocent victim of a scheming worker. They say her strip-search and jailing by federal authorities was inhumane. Khobragade has transferred to India’s UN mission, a move that awaits US State Department approval. She would have broader immunity in that position, but it’s not clear how that would affect her current case.

“Everybody in the advocacy community hopes this doesn’t set us back,” said Avaloy Lanning, the head of anti-trafficking program at the nonprofit Safe Horizon. “All of us are applauding the federal government for taking this stand, it was quite courageous and precedent-setting, and sends the message that we care about victims in these cases.”

Nations provide immunity to diplomats so they can engage in their jobs without fear of detainment or prosecution under a vastly different judicial system. The type of immunity depends on the level of an international worker’s job. When prosecutors wish to prosecute a diplomat with immunity, the State Department requests a waiver, and if the country refuses, the diplomat is deported, a department official said.

The State Department says it records mistreatment allegations made against diplomats and international workers in a database, but a spokeswoman would not say how many names were in the database or who was listed.

“We have taken unprecedented steps both to advise domestic workers of their rights in this country, and to impress upon diplomats that they are obligated to abide by our laws,” State Department spokeswoman Jen Psaki said. “And when abuses do occur, we have done everything in our power to get victims out of harm’s way and bring their abusers to justice.”

An Italian consular official in San Francisco who did not have immunity was arrested on charges of abusing his Brazilian servant in 2011, pleaded guilty to lesser charges this year and was sentenced to probation and fined $13,000.

US officials also arrested Taiwan’s envoy in Kansas City, Missouri, in 2011, on charges of trafficking maids from the Philippines. The government there at first demanded the woman’s release claiming she had immunity, but eventually relented and she was jailed and deported.

“The rule of the day has always been to intimidate these victims into going away,” said Martina Vandenberg, a lawyer who runs a nonprofit that offers legal help to trafficking victims. She said the Khobragade case shows the US is willing to prosecute, and won’t let diplomatic immunity “mean impunity,” she said.

Last year, the Republic of Mauritius waived immunity for its ambassador to the United States, who was charged and fined $5,000 for failing to properly pay a domestic worker minimum hourly and overtime wages in New Jersey after he pleaded guilty to one count of failing to pay the minimum wage rate.

But many cases in recent years weren’t prosecuted criminally, because of a lack of evidence or because of immunity complications, and ended up in civil courts.

In August 2011, Santosh Bhardwaj said she was lured to the United States with a promise of $10 per hour wages plus overtime and good working conditions. Instead, her lawsuit said, she was subjected for a year to forced labor and psychological coercion while she labored from early morning to late at night, seven days a week, at the Manhattan apartment of the then-Consul General of India at the Consulate General of India in New York. The suit ended in an undisclosed settlement.

In another case filed in July 2010, Shanti Gurung claimed she was “essentially kidnapped in her native India at 17 and trafficked to the US,” where she was held in involuntary servitude for over three years by a counselor at the Consulate General of India in New York, and her husband, an engineer.

After arriving in 2006, Gurung was forced to work 16-hour days, seven days a week, and was forced to sleep on the living room floor even though there were empty bedrooms, while enduring isolation and psychological abuse, the lawsuit said.