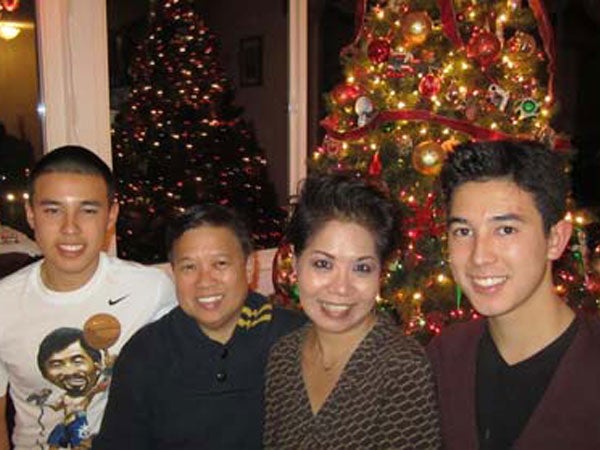 PACIFICA California — Jay Mercado opens the door, picks up packages on the doorstep and cheerily calls out to her partner Shirley Tan, “Look, hon, we have presents!”

By a lavishly decorated, rotating Christmas tree, their son Jashley Mercado, 17, is planted on the living room couch, watching television, while Shirley putters in the kitchen.

This is their first Christmas as an engaged twosome. When the gay couple celebrated their 27th year together in July, Mercado got down on her knee and asked Tan to marry her, as their children watched.

For many years, Tan and Mercado’s was the poster story for marriage equality and immigration rights for the LGBT community. Their struggle to keep their family together inspired many gay Americans with foreign-born partners caught in the same situation.

The marriage proposal came just a few weeks after the US Supreme court struck down the Defense of Marriage Act (DOMA) in June this year, ruling that same-sex spouses in America had the right to enjoy the same benefits as opposite–sex spouses.

“It warms my heart that they can finally get married,” their son Joriene, 17, said. “I’m really proud of my parents because they’re actually going to get married and it’s going to be recognized by the state of California and the entire U.S.,” said his twin brother Jashley.

In 2009 the boys almost lost their mother. Immigration agents arrested Tan to deport her. She had overstayed in the US and was scheduled for deportation after her request for asylum was denied. Tan, a Filipino national, had sought asylum for fear of her own life, after a cousin who had shot her and killed her mother and sister was released from prison in the Philippines.

Though Tan and Mercado were, by then, already domestic partners and the biological parents to two children, Mercado, a naturalized American citizen, could not sponsor Tan so she could legally stay in the US. As a gay couple, DOMA prevented them from enjoying immigration benefits available to heterosexual married couples.

Senator Dianne Feinstein (D-CA) introduced a private bill to spare Tan from deportation. “There’s still a private bill,” said Mercado. “(But) the bill is going to expire in March so we have to plan a date before then.”

The couple had wanted to marry on their 28th anniversary together in July, but now they plan to get married shortly after the New Year.

They want both Feinstein and Congresswoman Jackie Speier (D-CA 14th District), who have both supported their family through their struggle to remain together in America, to officiate.

“I am honored to officiate at their long awaited wedding that will finally give them peace of mind and allow them to not to worry about deportation that would tear apart their family,’ Speier told INQUIRERnet in an e-mail.

“Shirley and Jay can no longer be punished for loving each other. I am thrilled to be part of their happy day and this milestone for America.”

Life will change dramatically for Tan and Mercado next year.  They’re getting married and sending two kids to college. “Now I can petition Shirley, and she will be a green card holder,” said Mercado.

For Tan, a stay at home mom, it will be the first time in decades that she can legally work.  “Jay and I were talking.  I was just waiting for the kids to go to college. I can get a job because we’ll have two kids in college,” she said. She plans to go back to school, and hopes she can eventually work as a preschool teacher.

After the wedding, there are plans of a family trip abroad. “Now we can go somewhere else, go on vacation,” said Mercado. The boys want to go to Europe.

“We were never out of the country because of Shirley’s situation,” explained Mercado. As an undocumented immigrant, Tan could not risk leaving the US, because immigration authorities would not allow her to re-enter the country.

Life is opening up in so many ways for this family, whose options have been severely limited by social mores and the immigration system. For many years, Tan and Mercado’s story was the poster child for marriage equality and immigration rights for the LGBT community. Their struggle to keep their family together inspired many gay Americans with foreign-born partners caught in the same situation.

“It’s an honor for us to be helping other people,” Tan said. “For me and Jay, we know our relationship is for real, this (coming marriage) is just a formality now to validate (immigration) papers,” she said. “The bigger picture is, we were able to help a lot of people. We have made a difference in people’s lives,” said Mercado.

This Christmas is bittersweet for this family. “The kids are going to college next year,” said Tan. Like so many other parents with college-age children, they are already feeling separation anxiety. The thought of being empty nesters makes their eyes moisten.

“We don’t like that,” Mercado said. “For many years, we go to other people’s houses to spend Christmas. This year, we’ll spend it here, just us with the kids. It’s going to be a nice Christmas,” said Tan.

(This article was produced as part of New America Media’s LGBT immigration reporting fellowship sponsored by the Four Freedoms Fund.)