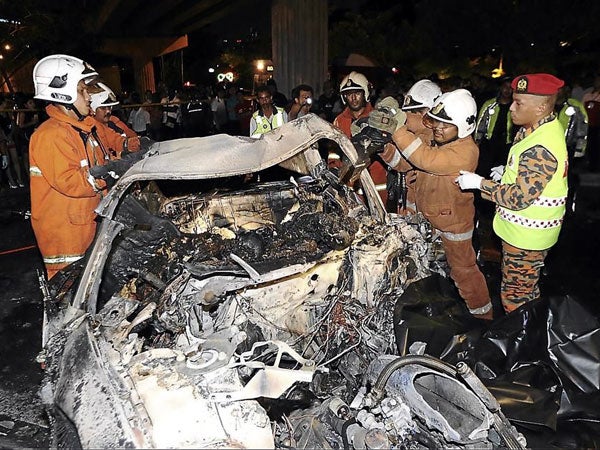 Horror on the highway: Fire and Rescue department officers extricating the charred bodies from the twisted wreck. The Star-Asia News Network

The victims were charred beyond recognition when their Nissan Skyline burst into flames after crashing into one of the highway pillars near the Kampung Pandan circumferential road at about 12:45 a.m. Wednesday.

The Kuala Lumpur Hospital (HKL) mortuary was filled with crying relatives and friends of the victims, several from Singapore, who came to pay their respects.

Police have identified the driver of the Nissan Skyline as 40-year-old Briton Simon John Hall.

The Filipinas were identified as Siso Aileen, 30, Maileen Montejo, 26, and Mary Grace Macaraig, 24.

The two Myanmar nationals who perished were Pi Pi, 20, and Esther Sui, 26.

It is learned that Hall was working as a manager in an offshore company in Jalan Tun Razak and was friends with the five women.

Sources revealed the women, with the exception of Siso, were waitresses who worked at a bar in Bukit Bintang here.

Marina, who is a cousin of Sui, said she came to the country in search of work four years ago.

“I am still shocked that she is gone,” she said in between sobs.

She was accompanied by two friends when retrieving her cousin’s body at the HKL mortuary Wednesday.

She was devastated after identifying Sui’s body and had to be consoled by friends.

The women’s deaths caused such a huge impact on the community of foreign workers that even distant acquaintances came to show their respects.

One of the Filipinas’ friends, who declined to be named, said the victims were on their way to supper when the accident happened.

City Traffic Chief Assistant Commissioner Rusli Mohd Noor said initial investigations revealed that the driver lost control of the vehicle and crashed into the pillars. With a report from Bong Lozada, INQUIRER.net