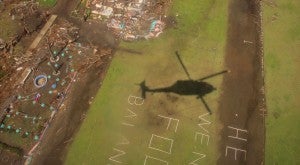 In this photo taken Saturday, Nov. 16, 2013, the shadow of a U.S. military helicopter on a disaster relief mission is cast passing over a sign pleading for help near Tacloban, Philippines. AP FILE PHOTO

Kerry flew to Tacloban City, where he was overwhelmed by the vast landscape of wrecked villages that he saw. He visited a food-distribution center run by USAID and government welfare officers, talked with officials and consoled survivors.

“This is a devastation unlike anything that I have ever seen at this scale,” Kerry said at a temporary USAID headquarters in Tacloban.

“It is really quite stunning,” he said. “It looks like a war zone and to many people it is.”

The new food aid, shelter materials, water and other supplies he announced for typhoon-lashed families bring the total US assistance package to $86 million to one of its closest Asian allies.

One of the most ferocious typhoons to hit on record, Haiyan left more than 6,000 people dead and nearly 1,800 others missing. It damaged or swept away more than 1.1 million houses and injured more than 27,000 people.

More than 4 million people were displaced, with about 101,000 remaining in 300 emergency shelters in typhoon-smashed central provinces.