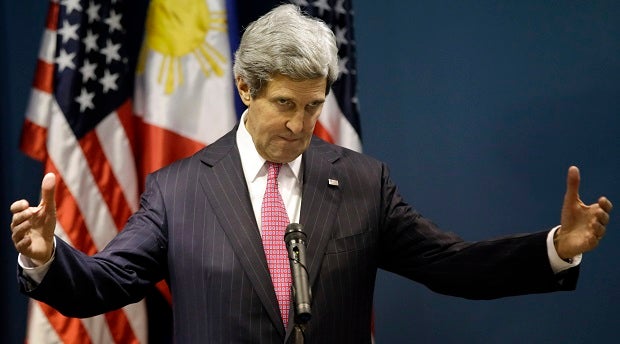 U.S. State Secretary John Kerry, gestures as he answers a question at a press conference following his bilateral meeting with his Philippine counterpart Albert Del Rosario Tuesday, Dec.17, 2013 in Manila, Philippines. Kerry announced Tuesday the United States will provide the Philippines’ security forces with $40 million in new assistance in part to help the country protect its territorial waters amid rising tensions with China over disputes in the South China Sea, U.S. Secretary of State John Kerry said Tuesday while urging all the nations involved to “lower the intensity.” AP/Bullit Marquez

“I have been involved in this issue since the 1980s, I believe in the science of climate change, I believe the scientists who tell us that it is happening and human beings are contributing to it, a significant cause of the increase of [carbon] emissions that is creating major changes across the planet,” Kerry said in a joint press conference with Foreign Affairs secretary Albert del Rosario Tuesday.

He also cited the prediction of scientists that there will be massive changes in agriculture, ecosystems, fisheries, water supply, food security, higher temperatures, fires, and the intensity of storms.

Kerry however pointed out that “science cannot prove that typhoon Yolanda was specifically the result of climate change, it is not possible to make that direct linkage at this point in time even though they are predicting greater intensity of storms.”

Yolanda tore through provinces in the Visayas region bringing with it winds of around 300 kilometers per hour and storm surges that washed away coastal towns. At least 6,000 people have been killed while millions have been displaced.

“Over time a pattern will evolve and that may become more determinative. Nevertheless what we face today, is sufficient to say that developed nations in the world need to take the lead in order to reduce emissions and begin to deal with this problem which lots of nations … are feeling the consequences of,” Kerry said.

The Philippines representative to the United Nations (UN) Climate Change talks, Naderev Sano, made an emotional appeal to 190 countries last November 12 to finalize an agreement to curb global warming.

“What my country is going through as a result of this extreme climate event is madness,” Sano said.

In an article published in The Guardian, he said that climate change will result in more intense tropical storms and that the Philippine will be particularly vulnerable because of its geographic location.

“As the Earth warms up, that would include the oceans. The energy that is stored in the waters off the Philippines will increase the intensity of typhoons and the trend we now see is that more destructive storms will be the new norm,” he said.

United Kingdom’s Prince Charles said in a speech at the Royal Society in London that “the frequency and intensity of extreme weather events has increased, and is set further to increase, in many parts of the world, as a direct result of anthropogenic climate change.”

The “facts and the science are clear and inescapable,” Charles was quoted as saying in a report by the UK’s Daily Mail news website.

Climate change was attributed by Al Gore’s documentary “An Inconvenient Truth” to the increase of carbon emission brought about by human activity such as transportation and factories.

The US is among the countries with the highest amount of carbon emissions along with China.

“It is clear that this issue is growing in consequence and importance, and it requires governments all over the world to push towards … an agreement about how we are going to avoid the worst consequences of what has already been put into play,” Kerry said.

Roofless in Palo: Lost in my hometown

To rebuild, Filipinos must ‘reconstruct their hearts’