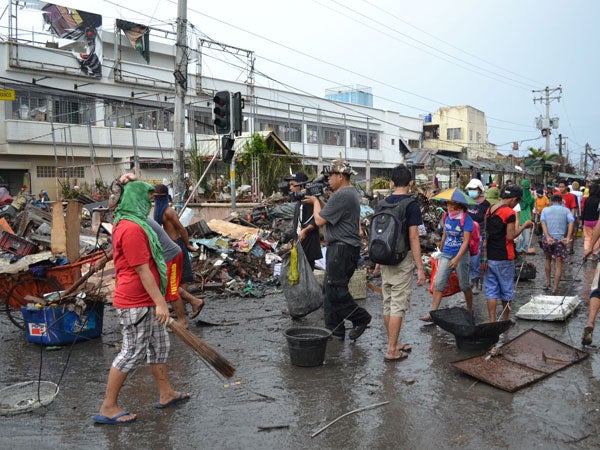 TACLOBAN CITY, Philippines—An official of the United Nations Children’s Fund (Unicef), one of the world’s biggest humanitarian organizations, is impressed by the Filipinos’ “sense of community” evident among the survivors of Supertyphoon “Yolanda.”

“What impresses me is the sense of community,” Anthony Lake, executive director of Unicef, told journalists here over the weekend.

Lake had gone around here, meeting people whose lives were devastated by the typhoon.

“There was a little girl and little boy I had talked to. At first they were smiling when I made faces. Then suddenly you can see that something would trigger their memory and there is a look of incredible sadness,” he said.

Lake said when the girl told him she would like to become a teacher, that’s when he knew she “needs to continue schooling as a start to bring back normalcy in their lives.”

He said aside from setting up “child-friendly spaces,” the Unicef has also taken steps to ensure the protection of women and children facing threats of abuse or trafficking.

“When you are in a situation like this, there is a possibility of child trafficking,” he said.

At least 70 children, most of them orphaned by the typhoon, are now in the custody of the Department of Social Welfare and Development and the Unicef.

Tomoo Hozumi, Unicef Philippines representative, said situations offering no alternative livelihood would often lead “to risky migration and that in turn will result to trafficking.”

Hozumi said children and women, who already suffered from the tragedy, should not have to be in great peril of being abused.

Pernille Ironside, a child protection agent of the Unicef, said local social welfare officers had intercepted at the Tacloban airport at least two minors who were with adults whom, they sensed, they “shouldn’t be with.”

UNICEF: Caring for the kids in ‘Yolanda’-stricken areas

UNICEF speeds up aid to ‘Yolanda’ victims, including 4M children