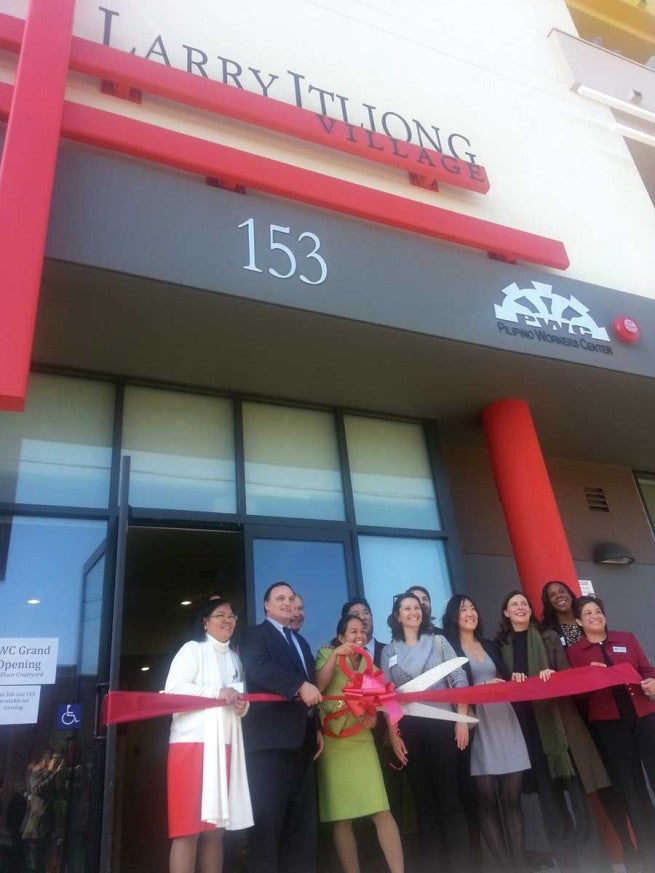 The development provides 44 units of affordable housing—22 for families and 22 for homeless individuals, including nine` for Transitional Age Youth.

There are also community spaces, which can be used as venues for recreational activities, as well as social service programs like affordable healthcare access assistance, immigration case management services, employment, job skills workshops and other activities.

The LTSC Community Development Corporation serves as the lead developer and managing general partner for the village.

According to LTSC staffer Takao Suzuki, their group has been working with PWC since 2004, in putting the development project together. For the last 30 years, the LTSC has been working to provide affordable housing in Los Angeles, Suzuki said.

Suzuki said that back then, PWC had already identified the site on 153 Glendale Blvd. as a place where the Filipino group can permanently stay to serve the community.

“Our model for affordable housing is that when we develop housing, we want to partner with a group within that respective community,” Suzuki said.

Suzuki, however, clarified that as far as onsite physical presence is concerned, the LTSC will only serve as the asset manager for Larry Itliong Village, and that they will supervise the site from their office in Little Tokyo.

“From our office [in Little Tokyo], we’ll make sure that the building is running fine, making sure that it’s in compliance. But really, you won’t see us onsite. It’s mainly going to be PWC. This is their home, so you won’t see LTSC here in terms of our presence,” he added.

The village houses the PWC’s headquarters, community rooms, office spaces and conference halls. Aquilina Versoza, PWC’s executive director, said that the development will serve as a “real base” where the organization can grow and do even more service to the community.

Versoza also indicated that aside from the community rooms, the PWC will also provide other services like weekly food distribution, free tax preparation, labor case assistance, and peer lending circles, among other things.

“This is one of the few affordable housing projects that’s been able to be built in many years. And it’s really needed,” Versoza pointed.

She claimed that before Larry Itliong Village came along, it had been at least a decade or so since the last affordable housing project was built in Historic Filipinotown.

Consul General Hellen Barber-De la Vega, who was also in attendance, said that the opening of the housing project is a milestone because two communities came together to address a sensitive issue among all Asian American communities: affordable housing.

“With this kind of partnership, we demonstrate that we do care for the other communities,” De la Vega pointed out.

The Consul General also said that the facility raises awareness among other communities on what Larry Itliong (the Filipino Farm Workers Movement leader) really stands for, which is bringing dignity to the worker.

She said that the legacy of Itliong is also about promoting proper housing and shelter, health, and education—issues that were relevant not only 40 years ago, but even today.

De La Vega said that there should be a sense of responsibility on the part of Filipinos in “shepherding” the interests and concerns of the community.