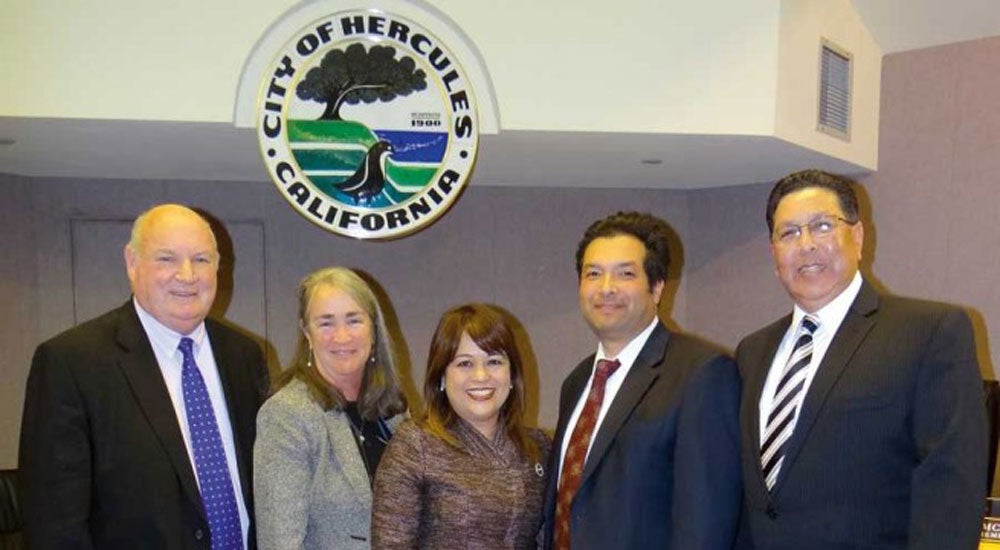 This is her second time to serve as mayor of Hercules, a city of 25,000 in the eastern part of the San Francisco Bay Area. De Vera, who was elected to the Hercules City Council in 2010, said the city faces many challenges in the year ahead, chief of which is finding a new city manager and planning director, both of whom have decided to pursue other endeavors.

“We first have to find a city manager,” De Vera told the Asian Journal during a break in the proceedings. “A city manager is very critical because he (or she) is the one who is running the city. The [city] council just sets the policy. I cannot understate the importance of finding the right people to fill the critical roles of running the city and planning our community.”

Another priority is economic development and the sale of parcels of land that are tied up in litigation. “The most visible unfinished task is Sycamore North,” De Vera said in her speech after her selection. “This is the third winter that it stands wrapped in Tyvek. The $5.1 Ambac lawsuit must be settled and its resolution lies in the sale of three parcels of land.”

The three properties—Sycamore Crossings, Parcel C and Victoria Crescent, are currently tied up in purchase sale agreements and are in the early stages of planning. “The development plans on these parcels will forever determine our city’s character, and future sales and property tax revenues,” she explained.

De Vera, who was vice mayor before the city council reorganization, added that balancing the city’s budget and finding revenues, including inviting unique and different business establishments to Hercules, are things that also need to be on their priority list.

“That’s what we should do, which we have not done yet,” the architecture graduate answered when asked if the city was actively recruiting businesses to come and establish themselves in Hercules.

De Vera also became slightly emotional during her acceptance remarks as she described the trials and tribulations she experienced in the past year, including a movement to strip her of her appointment as vice mayor, as well as facing complaints filed to both civil and criminal authorities.

Through it all, de Vera said she came out stronger and used her troubles as motivations for improvement. “I used last year’s trials as an opportunity to grow and change…I read books on leadership and self-improvement. I practiced whatever I learned during council meetings. I’ve made peace with myself and others for the sake of the greater good,” she disclosed, as she thanked God, her husband Manny, sons Mark, Christian and Emmanuel, sister Lorna, and her friends and supporters for their unwavering support.

Previous to her election to the City Council, De Vera served as Hercules Planning Commissioner from 2005 to 2011 where she served both as chair and vice-chairperson. She was also a member of the Design Review Subcommittee.

Read Next
Resilient, smiling Filipinos impress British soldiers
EDITORS' PICK
IATF to LGUs: Issue ordinances vs attacks on frontliners, COVID-19 patients
Nograles: Cabinet members to donate 75% of monthly salary to aid COVID-19 fight
Diokno to Duterte: OK to make fun of buck tooth, but focus on people’s needs first
10 Filipinos positive for COVID-19 in UK, 7 in Ireland — envoy
Quick chat with Nicole Andersson: ‘You really don’t need much to be happy’
Robredo spox thanks Duterte for defending VP’s efforts vs COVID-19
MOST READ
Gov’t mulling quarantine period extension of 15-20 more days
Sotto on Isko Moreno’s call: We do our job without the media following our every move
ADB warns PH against prolonged lockdown
Duterte fires PACC’s Luna for urging NBI to probe Robredo
Don't miss out on the latest news and information.