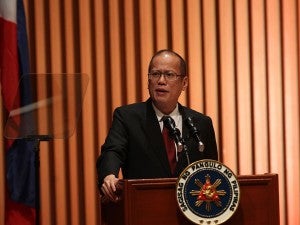 TOKYO—President Benigno Aquino III pushed for a rules-based approach to resolving territorial disputes between Asian nations and China, including the maritime row in the West Philippine Sea, when he spoke at the 40th summit between Japan and the Association of Southeast Asian Nations here on Saturday.

Aquino made a pitch for a “holistic strategy” that, he said, was “peaceful and rules-based.”

“The Philipines, therefore, is encouraged by the fact that the Asean-Japan vision statement, which we will be adopting at the summit,  reflects  our collective commitment to pursuing a more holistic strategy in guaranteeing the welfare and safety of all our peoples in safeguarding our shared interests,” Mr. Aquino during the first session of the summit, in which the various heads of government delivered their respective opening statements.

Aquino also pushed for stronger action against climate change as he noted that less industrialized nations “bear a disproportionate amount of suffering from the effects of climate change.”

The 40th Asean-Japan commemorative summit opened on Saturday morning with Aquino, Japanese Prime Minister Shinzo Abe and other heads of Asean in attendance at the Akasaka State House.

The summit, which marked 40 years of relations between Japan and Asean, provides a forum for the heads of government in the Asean region to discuss with Japan issues of regional implications, including the simmering tensions brought about by territorial disputes with China in the South China Sea, East Sea and East China Sea.

Due to the political crisis gripping her government, Thai Prime Minister Yingluck Shinawatra sent a deputy minister to represent her at the summit.

Aquino said that the Philippines was championing a “two-track approach” in resolving disputes with China in the West Philippine Sea, the name the Philippines uses to refer to that part of the South China Sea  that is within its so-called exclusive economic zone.

“This approach is both peaceful and rules based,” he said, calling for the adoption of a legally binding code of conduct “as soon as possible” and the use of arbitration to resolve territorial disputes. His use of the term arbitration was an allusion to the United Nations Convention on the Law of the Sea which provides for an arbitral tribunal to settle disputes between states.

“In addition, arbitration promotes the rule of law and redounds to the benefit of all parties,” Aquino said.

Aquino took the opportunity to discuss the Philippines’ maritime row with China even as other Asean leaders talked about drafting, toward the end of the summit, a document that would embody the collective sentiment of the region in the face of rising tensions due to the territorial disputes.

The President also raised the issue of the establishment by China of on air defense identification zone (ADIZ) which, he said, had ramifications on international civil aviation safety and security.

Japan and Asean should have “greater concern on the recent pronouncement of Chinese officials that China will establish other ADIZs in due course after completing relevant preparations,” he said. “As we move to deepen our partnership, we must never forget that we can only maximize our opportunities for growth in a wider regional, international community in which all nations adhere to the rule of law and work to promote peace and stability.”

Aquino concluded that adherence to the rule of law would underpin the stability of the region.

“It is therefore incumbent upon all of us to remain committed to the principles of international law and to continue to engage each other in a positive and productive manner as we tread the straight path to mutual prosperity and advancement in Asia Pacific,” he said.

Aquino was not the only one who pushed for a rules-based approach to resolving the territorial disputes.

Cambodian Prime Minister Hun Sen said his country “supports confidence-building measures that promote mutual trust and support the full implementation of the Declaration on the Code of Conduct in the South China Sea.”

He supported Asean initiatives to promote official consultations that would bring about the adoption of the Code of Conduct “at the earliest opportunity.”

“The East China Sea situation has become a concern and we appeal to all to exercise utmost restrain, engage in dialogue and adhere to international law,” Sen said.said Sen.

Vietnamese Prime Minister Nguyen Tan Dung  said his country was calling for the adoption of a “substantial and binding Code of Conduct, a process that should be carried out through peaceful negotiation and adherence to the UN Convention on the Law of the Sea.”

He supported the holding of dialogues on maritime and aviation security.

Aquino also thanked Japan and Asean for extending help in the aftermath of Supertyphoon Yolanda that ravaged many parts of central Philippines on November 8.

The President told his fellow leaders that “global climate change is a reality” and exhorted them to enhance efforts at combating climate change, explaining that he himself saw it effects when he visited Tacloban City and other places in the wake of the supertyphoon.

“Haiyan (international name of Yolanda) is a reminder to all of us that just as we are determined to safeguard the interest and welfare of our peoples by improving our capacities to prepare for and respond to natural calamities, we must also commit ourselves to dismantling the conditions that enhance the effects of these disasters,” he said.

“I respectfully submit that less industrial nations such as mine bear a disproportionate amount of suffering from the effects of climate change. We live on a single [planet]. And it is incumbent upon all of us, especially for the countries that have the capacity to contribute significantly in combating climate change,  to come up with an equitable mechanism that every nation, every corporation and every individual will adhere to,” he said.

Aquino looked forward to the Third World Conference on Disaster Risk Reduction  in 2015 here in Japan, “as it will provide us another opportunity to develop concrete steps towards not only building more resilient communities but also in addressing climate change and natural disasters.”

Read Next
Asean-Japan summit gets under way in Tokyo
EDITORS' PICK
POGOs not linked to Illegal online gaming, says Pagcor
Metro Manila now at moderate risk for COVID-19 — DOH
Pagasa: Storm Luis to exit PAR by Thursday
Do all the things you do, faster
Peeking inside the superb night camera features of the vivo V25 series
House energy committee chair Arroyo bats for cheap electricity
MOST READ
SC affirms conviction of ex-Leyte mayor for allowing illegal cockfights
Airlines cancel 2,000 US flights for Thursday
Remulla lambasts ICC chief prosecutor
Badoy not with Office of the President, NTF-Elcac, under Marcos admin — solon
Don't miss out on the latest news and information.