Mandela the rebel and his Filipino counterparts

Before he became a global icon of freedom and peaceful change, Nelson Mandela was a rebel.

And in embarking on a life of rebellion, he had hoped to learn from a Filipino.

One of the books Mandela was known to have studied as he was helping build the armed underground movement against  the apartheid regime in South Africa in the 1960s was “Born of the People,”  the memoir of Luis Taruc, leader of the Partido Komunista ng Pilipinas and a leading figure in the Huk rebellion in the 1950s.

Since his death last week, Mandela has been lionized as a the man who spent nearly three decades in prison for fighting against racism and later led a non-violent revolution that ended one of the most brutal social and political systems in history.

That, no doubt, is a surprising, perhaps even disappointing, revelation to many who identify communists with the Gulags and totalitarian oppression.

Or, in the Philippine context, with acts of dogmatism and senseless violence, with bloody purges of cadres who strayed from party doctrine, with the bombing a political rally or with the recent attempt to kill a 78-year-old small town mayor in Mindanao. 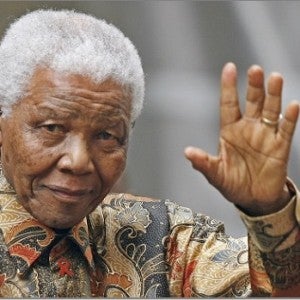 But the revelation also speaks to the other, contradictory image of the underground left as exemplified by the lives led by the likes of Mandela, Chris Hani, Joe Slovo and, in the Philippines, Edgar Jopson, Eman Lacaba and Lean Alejandro.

In fact, Mandela’s story, his triumphs and failures, are relevant for Filipinos at a time of growing disillusionment with government and traditional politics, and when there are still many preaching armed revolution as an alternative.

For Mandela’s life covered both narratives. He was both the man at the top — and the outlaw who defied those who were on top.

That he once tried to draw lessons from Taruc’s life points to the similarities of the struggles in South Africa and the Philippines.

In fact, having read his autobiography, “Long Walk to Freedom,” and the many articles on his life, I’ve been struck by the similarities between his story and the experiences of leaders of the Filipino left, which I had the chance to explore in “U.G. An Underground Tale,” a biography of the late activist Edgar Jopson.

Like Jopson, Mandela was drawn to politics as young man hoping to reform an unjust system. Realizing that peaceful reform was not possible under apartheid, he helped build a clandestine movement seeking change through armed revolution.

There are, to be sure, notable differences in the way the U.G. left evolved in South Africa and the Philippines.

That movement also gave birth to a political culture that was, in many ways, responsive to the needs of the weak and the powerless in Philippine society, one that acknowledged that it was important for the marginalized — farmers, workers, students, the urban poor —  to become part of the process of changing society.

But that movement had a dark side, one that came to dominate the U.G., especially after Edjop’s death: For it was also a movement dominated by narrow-minded leaders who were capable of incredible cruelty and dogmatic violence.

On the other hand, the South African movement, led by the ANC, displayed a kind of political nimbleness that helped the ANC survive as an underground force for three decades. A key strength: they generally did not mistake dogmatism and arrogance for determination and perseverance.

The ANC had a clear political objective, but did not get blindsided by an obsession with “the correct line.” Mandela himself did not hesitate to address the excesses of people within his movement who used their power to harass and bully those who disagreed with the ANC.

In fact, among the movement’s leaders were Joe Slovo and Ruth First, who were white and who are now remembered as among the heroes of the struggle against apartheid.

Ruth First was killed by South African security agents who sent her a letter bomb that exploded in her office in Mozambique in 1982, the same year Edgar Jopson was killed in a military raid in Davao.

I had the privilege of hearing Joe Slovo speak at a New York conference where he also regaled attendees with stories of the ANC struggle.

This was in 1991 when my biography of Edgar Jopson was republished in New York as part of a collection of novels, memoirs and works of non-fiction on resistance movements in different countries, including the Philippines and South Africa.

The series, called ‘Voices of Resistance,’ included “117 Days,” Ruth First’s memoir of her ordeal as a political prisoner, the book that inspired the award-winning film, “A World Apart,” starring Barbara Hershey.

The book recalls a desperate time, but also one in which she and other South African activists, including Mandela, “emerged from a spell of community jail life with morale marvelously unimpaired.”

“Every new stretch of prison for a group of political prisoners gave birth to a new batch of freedom songs,” she wrote. “Jail spells had not broken us; they had helped make us.”

It’s a portrait of defiance remarkably similar to the one painted by Filipino activists who endured torture and prison during the Marcos dictatorship.

Sadly, for South African and Filipino activists, life in the underground also meant a life of pain for their families.

One of the most moving materials I used to write Edgar Jopson’s story was a tape recording he and his wife Joy sent to their son Noy in the early 1980s. For their own children’s sake, they had decided not to have them live with them in the U.G.

And on the tape, they tell Noy Jopson (now an accomplished triathlete) how much they loved and missed him and how they hoped that one day they would all be together and not have to live apart because his parents had to fight a dictatorship.

That day never came for Edjop. He was killed shortly after recording that message.

Mandela was luckier in a sense, though he also acknowledged the life of separation and uncertainty his own children endured.

This was dramatized in a 1995 scene recalled by Gillian Slovo, daughter of Joe Slovo and Ruth First, in her memoir “Every Secret Thing.” It is a recollection that also highlights Mandela’s humanity and capacity for compassion.

Mandela visited the Slovos at their home to comfort his friend and comrade Joe Slovo, who was dying.

By then, Mandela was already a revered world figure. But in a solemn, quiet moment, he apparently found himself reflecting back on their days in the underground movement and how their families had suffered because of their involvement. He then turned to Slovo’s daughters to share a personal story.

He once tried to hug his own daughter, Mandela recalled, but she flinched away, saying, “You are the father to all the people, but you have never had the time to be a father to me.”

“This, he said, was his greatest, perhaps the only regret: the fact that his children, and the children of his comrades, had been the ones to pay the price of their parents’ commitment.”

Gillian Slovo could have been describing the lives of Filipino underground activists who joined the fight against dictatorship as she continued:

“There it was – the one against the other: their work, our need, their commitment, our lives, there was no squaring the circle. They knew it, somewhere, all their generation: as the state had poured out its wrath, they had watched their children suffer. And yet, and yet – what else could they have done?”