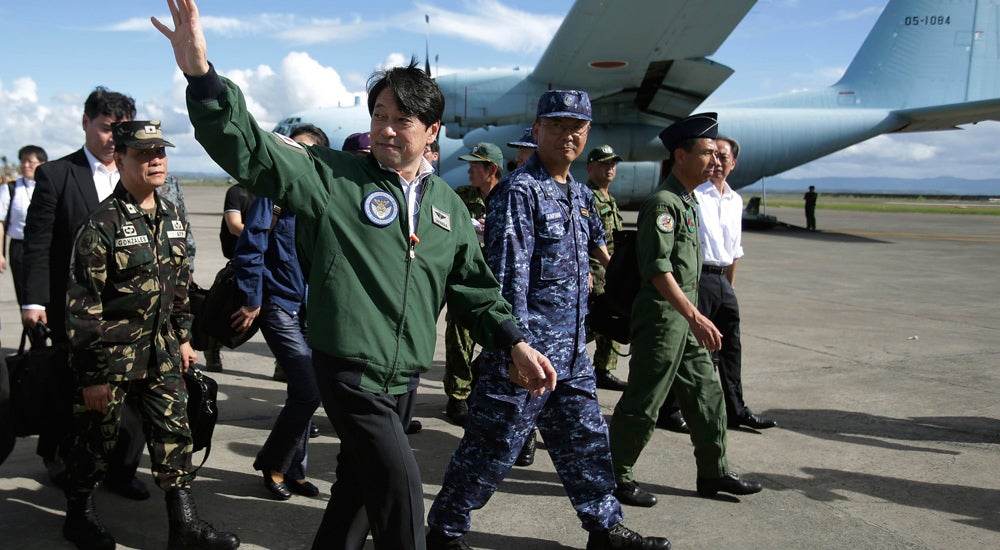 Japanese Defense Minister Itsunori Onodera, center, waves as he arrives at the airport in Tacloban City on Sunday, Dec. 8, 2013, to look at the magnitude of the disaster for additional Japanese aid. Onodera called on the international community on Sunday to oppose China’s recently declared maritime air defense zone over the East China Sea and possibly over the disputed West Philippine Sea (South China Sea). AP PHOTO/AARON FAVILA

In his meeting with Bishop, Onodera said he mentioned that the international community “should meet to deal with this matter together” and that any unilateral action by coercive means should be opposed.

“If any country would establish a similar air zone in the South China Sea, that would bring up tension in the region and I mentioned that should be stopped,” he told reporters in Tacloban, where he visited a school serving as a shelter for villagers who lost their homes in the Nov. 8 typhoon.

Onodera said the issue should be resolved by dialogue.

The United States, Australia, South Korea and other countries have also expressed alarm over China’s new air identification zone in the East China Sea. Beijing says all aircraft entering the vast area must identify themselves and follow Chinese instructions.

China’s ambassador to the Philippines, Ma Keqing, said early this week that it was Beijing’s right to decide “where and when to set up” an air identification zone.

Ma was asked about a possibility that China might set up a similar zone over disputed areas in the South China Sea, which are claimed in whole or in part by the Philippines, Vietnam, Malaysia, Brunei and Taiwan.

Ma did not categorically say when and in what areas would China set up such an air defense zone in the disputed territory, all of which Beijing insists belongs to China.

Foreign Secretary Albert del Rosario has also voiced fears that Beijing would set up a similar zone in the South China Sea and that Manila would oppose such a move if Beijing did.