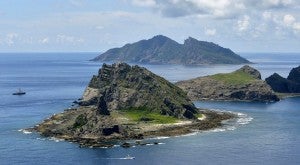 The vessels entered the 12-nautical-mile territorial waters at about 9:00 a.m. (0000 GMT) off one of the Senkaku islands, which China also claims and calls the Diaoyus, the Japan Coast Guard said. They left the area shortly after noon.

It was the first time that Chinese coastguard ships had been spotted sailing through the waters since Beijing raised regional tensions with its declaration of an Air Defense Identification Zone in November.

Chinese vessels have sailed in and out of contiguous waters around the islands but stayed away from entering territorial waters since November 22, a Japanese coastguard official said.

Japan’s conservative Prime Minister Shinzo Abe has vowed no compromise on sovereignty of the islands and stepped up defence spending, believing that China is trying to change the status quo through growing sea incursions.

Chinese state-owned ships and aircraft have approached the Senkakus on and off to demonstrate Beijing’s territorial claims, especially after Japan nationalised some of the islands in September last year.