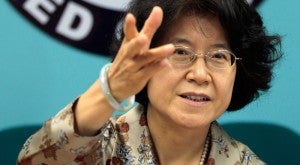 Despite increasing tensions over unresolved maritime disputes between China and the Philippines, Chinese Ambassador to the Philippines Ma Keqing can talk earnestly about the positive aspects of Beijing’s relations with Manila, especially shared concerns like natural disasters. AP FILE PHOTO

MANILA, Philippines—Despite increasing tensions over unresolved maritime disputes between China and the Philippines, Chinese Ambassador to the Philippines Ma Keqing can talk earnestly about the positive aspects of Beijing’s relations with Manila, especially shared concerns like natural disasters.

Late on Tuesday, Ma spoke about China’s response to the devastation wrought by Supertyphoon “Yolanda” (international name: “Haiyan”) in Eastern Visayas, where Chinese medical teams have been working since the early part of a global relief and recovery effort.

“While we are facing some difficulties and problems in our relations, we should answer to the appeal from the people for our continued affinity between our two countries by properly handling the differences,” Ma said at a reception the Chinese Embassy threw for Filipino graduates of Chinese-sponsored human development training programs.

“I believe as goodwill ambassadors, you can do your part in promoting mutual understanding and mutual trust between our two countries,” Ma said.

Ma spoke a day after reiterating China’s sovereignty over the South China Sea, part of which—the West Philippine Sea—Manila claims, as it is within its 370-kilometer exclusive economic zone recognized under international law.

Responding to reporters’ questions on Monday, Ma said China had the prerogative on “where and when to set up the new air identification zone” in the South China Sea, a concern earlier aired by Philippine officials.

She, however, did not say if there were already plans to declare an air defense zone similar to the much-criticized “air defense identification zone” that China on Nov. 23 declared in the East China Sea, where it has a longstanding territorial dispute with Japan.

The Department of Foreign Affairs (DFA) had no comment on Wednesday on Ma’s statement.

DFA spokesman Raul Hernandez merely repeated the contents of a statement issued by the department on Nov. 28, expressing concern over China’s declaration of an air defense zone in the East China Sea that amounted to transforming the zone into Chinese domestic airspace, infringing on the freedom of flight in international airspace and compromising the safety of civil aviation and national security of affected states.

Foreign Secretary Albert del Rosario said in a television interview on Nov. 28 that Beijing’s declaration raised the prospect of it doing the same in the West Philippine Sea.

Ma did not mention the dispute with Japan in her speech, making only a passing reference to the rivalry between Beijing and Tokyo for ownership of islands in the East China Sea known to the Chinese as Diaoyu and to the Japanese as Senkaku.

She instead focused on the other side of Manila-Beijing ties. Ma spoke about how China sent help to the Philippines although Yolanda also hit parts of southern China.

“China and the Philippines are close neighbors across the sea. We share many things in common, even in natural calamities. When the Supertyphoon Yolanda devastated central Philippines, it also hit three provinces in China,” she said.

“We have a saying in Chinese [that is the] equivalent of ‘a friend in need is a friend indeed.’ After the devastation caused by Yolanda, China came to help,” she said.

The Chinese government has sent $100,000, or P4.388 million in cash aid, and some P73 million worth of relief, including blankets and tents for temporary shelter for displaced Eastern Visayans. The Chinese Red Cross Society and private organizations also sent aid for the typhoon survivors.

“This is a brand-new example which showcases the centuries-long strong bond forged between our peoples,” Ma said.