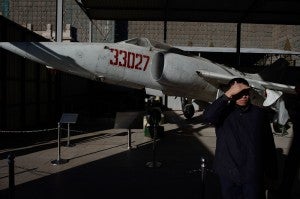 A visitor stands before a decommissioned Chinese A-5 Ground Attack aircraft at the Military Museum in Beijing on November 28, 2013. AFP FILE PHOTO

MANILA, Philippines – The United States and Japan will not tolerate what they called China’s attempt “to change status quo unilaterally by force” through the establishment of its Air Defense Identification Zone (ADIZ) over East China Sea.

“We discussed [China’s] announcement of establishing East China Sea ADIZ by China and confirmed that we should not tolerate the attempt by China to change status quo unilaterally by force,” Japanese Prime Minister Shinzo Abe said in his remarks to the media after a meeting with United States (US) Vice President Joe Biden Tuesday.

He said that both the US and Japan will “not condone any action that could threaten safety of civilian aircraft.”

Biden, who is also set to visit US ally Korea, reiterated its concern on the establishment of the ADIZ saying it raises tensions and increases the “risk of accidents and miscalculation.”

“We, the United States, are deeply concerned by the attempt to unilaterally change the status quo in the East China Sea.  This action has raised regional tensions and increased the risk of accidents and miscalculation.  We are closely consulting with our allies on this matter, here in Japan and in Korea, which I will soon visit later this week, Biden said.

He further said that he sees the need to increase communications between China and Japan to avoid escalation of tensions.

“The United States has an interest in the lowering of tensions in this vital region, as I believe all the countries of Northeast Asia share that same interest with us,” Biden said.

“This underscores the need for crisis management mechanisms and effective channels of communication between China and Japan to reduce the risk of escalation. I’ll be raising these concerns with great specificity directly when I meet with Chinese leadership the day after tomorrow,” he said.

China and Japan have been in a territorial dispute over the Senkaku or Diaoyu islands in the East China Sea. Both countries claim the islands as their own.