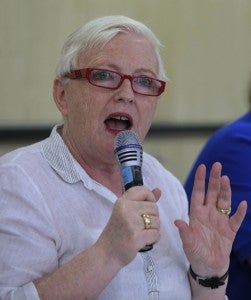 Orla Fagan of the UN Office for Coordination of Humanitarian Affairs in Manila answers a reporter’s questions in Makati City on Friday, Nov. 29, 2013. U.N. agencies said they will seek funds for a 12-month plan to revive areas devastated by a supertyphoon in the central Philippines in addition to $348 million they had sought for immediate relief. Fagan said that the plan will be put together with aid groups and may be ready next month. (AP Photo/Aaron Favila)

MANILA, Philippines—The United Nations is to seek more international aid to shelter and give temporary jobs to millions displaced by the Philippines’ deadliest typhoon in history, officials said on Friday.

“Providing shelter and rebuilding lives is an urgent priority,” said UN resident and humanitarian coordinator Luiza Carvalho, laying out the state of dozens of towns and cities three weeks after they were ravaged by Supertyphoon “Yolanda” (international name: “Haiyan”).

“There are many needs in the aftermath of the typhoon and we require support to be able to put people back on their feet. Families require safety, shelter and work to sustain a decent life,” she added.

The spokesperson for the local UN office, Orla Fagan, told a news conference donors had forked out $164 million, or just under half of the initial UN humanitarian appeal for $301 million.

The earlier appeal was launched on Nov. 12, four days after Yolanda unleashed powerful 315-kilometer-per-hour winds and giant storm surges in the central Philippines.

At least 5,598 were killed and 1,759 others are missing, mainly in the predominantly poor islands of Samar and Leyte, according to a government tally.

Yolanda disrupted the lives of 14 million people in an area about the size of Portugal and wrecked 1.1 million houses, so “$10 a head” in aid would not be enough, Fagan said.

UN relief agencies are to draw up specific aid requirements in mid-December when they come up with a “strategic action plan” for the next 12 months that would be implemented side by side with the government’s own efforts, Fagan said.

Simon Hills, country disaster response officer for the International Labor Organization (ILO), said 5.6 million people had lost their means of livelihood, some of them permanently.

While many were fishermen and farmers, more than a million were drivers, maids and security guards, he said.

Hills said the ILO and the labor department had found temporary work for 17,000 people clearing typhoon debris, and building temporary homes for the displaced and levees to prevent future flooding.

Farmers need urgent help in procuring seeds, fertilizer and tools, otherwise they will not be able to plant rice and could go hungry next year, the UN statement said.

Fagan said temporary building materials such as tarpaulin sheets were being given to families to relieve pressure on evacuation centers, which now shelter 219,000 people according to the government.