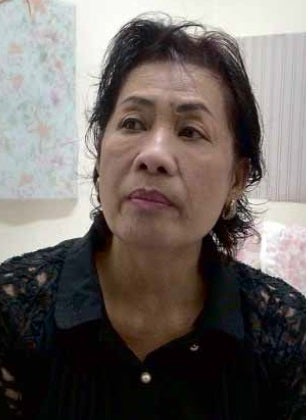 HONG KONG—To get to their flat, one has to climb several floors on a grimy staircase.

The single-room apartment is small—a little over 100 square feet—and has a window but it is covered. The bathroom doubles as the kitchen and the ironing board doubles as the dining table.

The shower works but the heater is broken. Temperatures are expected to drop here to 14 degrees Celsius later this week.

“Sometimes in the morning, my daughter would shout, ‘It’s so cold!’ while taking a shower before going to school,” said Myrna Reblando.

Then she holds up her hands, weathered from all the washing of their clothes in rushing cold water. The washing machine is tucked inside the bathroom but the water pipe to it is broken.

Such is the life of the widow of one of the 32 journalists killed in the 2009 Maguindanao massacre, which also left 26 other people dead.

Fearing for her safety, Reblando, the widow of Manila Bulletin correspondent Bong Reblando, fled to Hong Kong with her youngest daughter in May 2011 and applied for asylum with the United Nations High Commission for Refugees.

She also filed torture claims with the Hong Kong Immigration Department, asserting that her life would be in danger if she returned to the Philippines.

The immigration department rejected her claim in April but Reblando has filed an appeal.

“I think my appeal has a good chance of succeeding. Lawyers handling asylum cases here would drop their clients if they saw that there was no more hope,” Reblando said.

“Mine told me, ‘Why do you think I haven’t dropped your case?’ It’s because I’m telling the truth,” she said.

Reblando has decided to continue her fight for justice for her husband from Hong Kong, where daughter Julia is continuing her studies in a public school.

Myrna and Julia live in the tiny flat with the support of the Hong Kong government and nongovernment organizations.

“As I told you, once you walk in, you see everything. This (room) is our bedroom and our sala. This is everything,” she said.

“The heater does not work so even if the water is so cold I have to continue washing. I stop when I feel numb. I run back to bed and cover myself with blankets,” she said.

Mother and daughter share the small bed and have to be careful not to make a splash when taking a shower.

“We hang our laundry in the bathroom and it takes almost five days to dry, so we have to be careful when we douse ourselves with water,” she said.

“I also have to place some pillows on the side of the bed to extend it a bit. It seems that we always have a cough. I’ve lost 15 kilos since we came here,” she said.

The Hong Kong government and support groups provide for their food, water and rent of HK$2,400 (around P13,500) for the flat.

“I cannot complain because everything you see here, from the shampoo to the perfume, they were all given by (the support group) Christian Action,” she said.

“Even our food, those fruits there, they were given by the government. It’s just that you cannot choose your food. It’s always chicken, chicken, chicken. But then again, you don’t have this kind of support back home.”

Julia is taking her Form Five or fifth-year high school. She’s supposed to be in second-year college but she had to retake a year of schooling to adapt to the educational system in Hong Kong.

“It’s OK. Most of the students in my school are Indians, Pakistanis and Nepalis. Around 27 percent are Filipino. We are 33 in class,” she said.

The medium of instruction is English but they are also taught Cantonese.

“I wasn’t able to start with the basic so it was hard … but I can still catch up. I have friends who are half-Chinese, half-British,” Julia said.

Asked if she considered returning to the Philippines, Reblando replied: “I want to go back but I don’t want my children to get hurt. If I’m there, the focus will again be on my family. Mainit sila … sa amin (The heat is on … us). ”

“My son was shot at outside our home in General Santos City. We noticed strangers milling around. Even my relatives, when I stay at their house overnight, they leave me there alone and only return to check on me,” she said.

And even though she is away in Hong Kong, her children and grandchildren back in the Philippines still have to take precautions. They do not stay in one place and have changed their names.

Reblando said the Philippine government also offered financial assistance but it was “not enough.”

“Why have I stayed here for the last two years? I don’t want my children to suffer further. They are all I have. My daughter already suffered from trauma. She now has an anxiety disorder. Even now, they often change their names and addresses. That is not normal,” she said.

While following up her asylum application, Reblando is undergoing counseling to help her deal with her own trauma from the massacre.

“It gets worse as the anniversary approaches. Why is it that it becomes more painful as the years pass? I should have shouted it out then. I should have really cried,” Reblando said.

“But how can you cry when your children are watching you? You have to show them that you are strong. But the more you push it back, the more painful it is eventually,” she said.