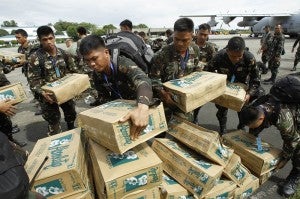 Personnel of the Philippines Army 51st engineer corps load water for victims of Supertyphoon “Yolanda” (Haiyan) at Villamor Air Force Base in Manila on Nov. 11, 2013. The Spanish government has provided up to P80 million in aid to support the Philippines’ response to staggering humanitarian needs in typhoon-ravaged Eastern Visayas, among the first European nations to send help since the Nov. 8 typhoon. AP PHOTO/WALLY SANTANA

MANILA, Philippines—The Spanish government has provided up to P80 million in aid to support the Philippines’ response to staggering humanitarian needs in typhoon-ravaged Eastern Visayas, among the first European nations to send help since the Nov. 8 typhoon.

In a statement sent to the Inquirer, Spanish Ambassador Jorge Domecq said the Philippines has been “the main recipient of Spanish humanitarian aid worldwide,” with some 26 million Euros, or P1.5 billion, in aid since 2007.

“Please believe us, we wish they (aid) would not have been needed and we hope they will not be needed in the future,” the envoy said in a statement.

Spain has also been funding a resilience-building program in Albay province, which aims to strengthen local government responders in the face of natural disasters. Initiated in 2009, the Albay Strengthening Project “could be considered as a best practice and an example to replicate,” the Embassy said.

In Madrid, the Philippine Embassy held a special Mass for typhoon victims on Nov. 21, gathering some 300 members of the Filipino community, top Spanish government officials and private sector leaders at the Crypt of the Catedral Santa María la Real de la Almudena.

Cardinal Antonio María Rouco Varela, the archbishop of Madrid, expressed his sympathies to those affected by the typhoon and “expressed how much he shares the pain and the loss of lives of Filipinos in this tragedy,” the Department of Foreign Affairs said.