Grand Balagtasan on divorce in the Philippines

SAN FRANCISCO, California—Midway through a sunny Saturday afternoon filled with singers, dancers and comedians (notably still sexy octogenarian Elizabeth Ramsey) eliciting delight, and politicians soliciting votes, the crowd, estimated at more than 10,000 people, standing in the grassy knoll in front of the Yerba Buena center stage for the 18th annual Pistahan festival in San Francisco on August 13, was eager for something new.

That something new—not usually seen in Filipino fairs in the US—was the Grand Balagtasan, a traditional debate with two protagonists jousting in Tagalog poetic verse, with the cadence of a sing song rhythm.

When our names were announced by Tony “Junjun” Villegas, Jr. (yes, the son of Yeba), I strolled on to the stage along with my protagonist, Rudy Asercion, and Greg Macabenta, the moderator and scriptwriter.

Greg, the self-described “makatang pulpol” (dull-bladed poet), presented the topic to be debated—Divorce in the Philippines—and warned the audience that the heated exchange of fireworks between Rudy and me would be done “katuwaan lamang” (in the spirit of jest).

I started off by arguing that divorce was needed because the reality of life is that “may mga nagsasama, halos di magkita sa kwarto’t sa kama… walang pagmamahal, parang estranghero at hindi kasal.” (There are many couples who remain together in loveless relationships, not even sharing room or bed).

I replied that there is a world of difference between a lovers’ spat, that is normal in every relationship, and situations where “mag-asawa’y madalas nang mag-away, kawawang babae ay mapapatay. Pagka ang babae ginugulpi na, at bugbog sarado sa suntok at sa sipa…” (couples are constantly fighting which sometimes leads to the poor wife being beaten up, near death), “ano’ng dapat gawin, what is her recourse? Dapat humiwalay, dapat mag-divorce” (the wife should have the option to get a divorce).

The problem with legal separation, I said, was that “wala nang pag-asang ma-in love na muli. Sa mata ng batas sila’y nakatali”(there is no hope to fall in love with another, in the eyes of the law, you’re still tied to the other).  “Sa dibursyo ay libreng muling magasawa. Di na kailangan na maglokohan pa.”(In divorce, one is free to get married again, no need to fool around).

But I retorted that the Catholic Church itself has a “paraan na gawing walang bisa, banal na sumpaan (a means to set aside sacred vows). Divorce is allowed by the Catholic Church, only it’s called by a different name: “sa marriage annulment, kasal kanselado”.

Rudy explained that as far as annulment goes, “mahigpit ang proseso ng ating Simbahan” (the Church has strict procedures to obtain a marriage annulment.) Unfortunately, Rudy inadvertently blurted “presyo”, instead of “proseso”, which happens to also be true as the price of obtaining a church annulment is way too high.

I pointed out to Rudy “doon mismo sa Roma, divorce ay legal, bakit sa Pilipinas ipinagbabawal?” (divorce is legal even in Rome, so why should it be banned in the Philippines?) “Sa totoo lamang, lahat na sa mundo, sa issue ng divorce ay nagkakasundo. (In truth, in all the world, on the issue of divorce, there is unity.) 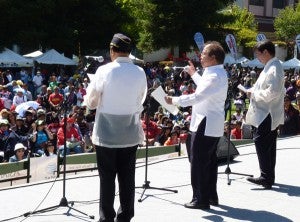 Rudy’s questioned whether “Iyan bang dahilan, magiging gaya-gaya?” (Is that the reason, just copy what everyone else is doing?) “Pangako sa Diyos ay dapat igalang, ang pag-aasawa’y hanggang kamatayan” (the promise to God should be honored, it’s marriage until death).

I pointed out that everyone should be guided by their own conscience. Unfortunately, the children from “kasal na baldado, lahat sila, labas bastardo” (children born out of wedlock are considered bastards).

Rudy expressed his certainty that if divorce is legalized, the “Pundasyon ng society nitong Pilipinas, tiyak mawawasak at ma-aagnas” (the foundation of Philippine society will crumble).” Itong pag-dibursiyo huwag mo nang ipilit at baka misses mo, sa iyo ay magalit. Baka naman ikaw ay may masamang balak,  At may tinatagong ligaw na bulaklak.” (don’t persist with advocating for divorce or your wife will suspect that you have an ulterior motive).

I berated Rudy for the thought. “Wala namang ganyanan, walang personalan, mangatuwiran ka dito sa balagtasan” (Let’s not get personal, let’s use reason and stick to the subject.) Then I added, “Aalahanin mo, Rudy, dito sa America, may divorce, ang pagsasama namin ni Missis, dahil sa pag-ibig, di dahil walang recourse.” (Remember, Rudy, we have divorce here in America, so my wife and I remain together bounded by love, not because we have no other recourse.)

The Balagtasan then ended with Greg reminding everyone that in a Balagtasan, “hindi mahalaga manalo’t matalo.  Ito ay tagisan sa talas ng ulo, sa galing ng isip sa pagtutol, sa husay bumigkas at bilis ng dila.” (It’s not important who won or lost, this is a contest of wits based on the sharpness of mind and the speed of the tongue).