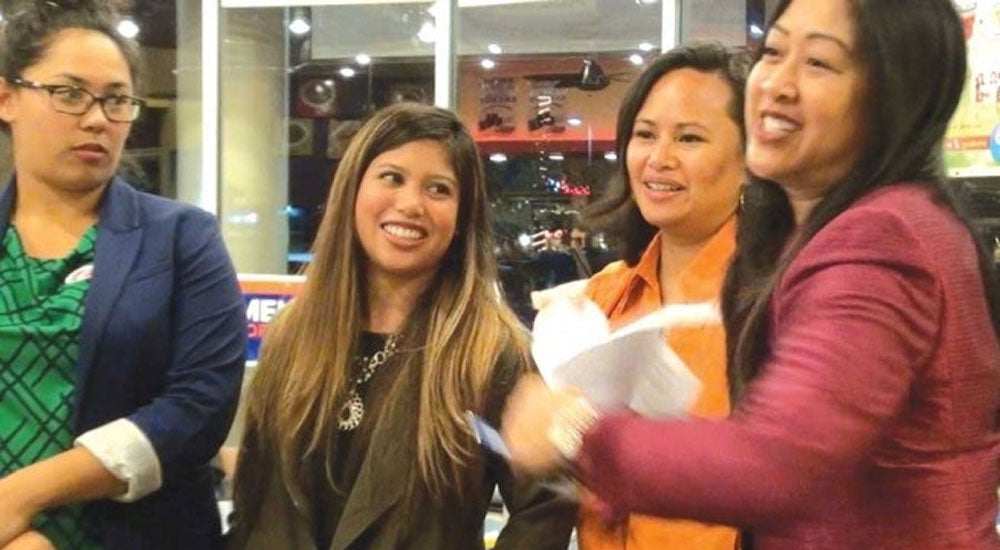 CERRITOS, California—As expected by political pundits in the ABC school district, Lynda Johnson, a paralegal by profession, cruised to an easy victory when she topped the recent ABC School Board election in the field of five candidates.

Another Fil-Am candidate, re-electionist and former mayor Victor Manalo came in second in the field of six hopefuls in a low turnout election topped by former mayor Sally Flowers.

Newcomer Melissa Ramoso, a Fil-Am who works for a California State senator, came in fifth but did not make it to the Magic Three.

Currently the board clerk, Johnson garnered 4,395 of the votes in the district that comprised the cities of Cerritos, Artesia, Lakewood, Hawaiian Gardens and parts of Long Beach and Norwalk. Korean-American Soo Yoo trailed her with 4,035 votes.

A re-electionist who had  served for two years for the unexpired term of then school board member Mark Pulido, when he won as Cerritos councilman two years ago, Johnson was all aglow when results trickled in at the Goldilocks Restaurant, showing her consistently in front of the pack.  Community leaders as well as elected and appointed public officials were on hand to share her victory.

An associate professor in the School of Social Work at Cal State University, Los Angeles, Manalo was first elected in 2007. Now on his term beginning in 2014, he garnered 630 votes.

When her victory became obvious, Johnson thanked the ABC community that supported her  on this campaign trail. “We were in it together and together we won!” she said,  “Thank you to those that gave me their endorsement, walked the precinct, made phone calls, made a donation, put up a lawn sign and have been by my side for the past 80 days.”

Among the organizations that supported her bid were the ABC Federation of Teachers headed by Ray Gaer, the ABC classroom teachers, the American Federation of State, County and Municipal Employees led by Linda Harbin and California School Employees Association led by Rebecca Michel-Macias.

Although not in the crowd, she acknowledged the Yokoyama family, owners of Century 21 Wise Ol Owl Office where she held her headquarters, his father, Samuel Johnson, and  campaign coordinators Marissa Rebaya, Lauren Poblete and Marissa Sunio, Esq.

She concluded by expressing her special thanks to the voters in the ABC community for “placing their trust and confidence in me by re-electing me to serve on the school board these next four years.”

Manalo, who awaited the results of the election at his home, issued this victory statement to his constituents: “I am grateful to the voters of Artesia for giving me the opportunity to serve them as their council member for four more years. While I am proud of what we have accomplished over the last four years, there is much more that needs to be done. We need to recruit diverse businesses to Artesia to increase our revenues, and we need to invest those revenues into services and programs that meet the needs of our residents, improving our infrastructure, and engaging our residents in our city’s decision-making process.”

He added: “I humbly ask for your continued support as we work together to improve the quality of life for all the residents of Artesia-Cerritos and beyond.”

Despite her loss, Melissa Ramoso was gracious enough to issue a statement immediately after the election to her supporters. She said: “I still feel like a winner because I did this with all my heart and soul for the future of Artesia and for the next generation to come.”

“It was an incredible journey where I took the biggest leap of faith of my life. I’m amazed at all the love and support I received from across the nation and coverage from the press such as the Huffington Post, Orange County Register, Asian Journal and numerous other Filipino-American newspapers. I’m thankful for my family, my team and volunteers who ran by my side—calling voters and knocking on doors. It truly was a labor of love. I’m thankful for all the community leaders that put their name to my campaign and believed that I was the best choice for the city; for this, I am forever grateful for. I’m also very thankful for those who donated that made what I thought was an impossible dream, a true reality,” she added.

Ramoso is the only challenger who is a product of the local school system and has seen Artesia in its worst and brightest days as a little girl. Unbowed, Ramoso said matter-of-factly: “I can walk away with a smile on my face knowing I gave 110 percent. We ran a clean and honorable campaign that hopefully opened the eyes of Artesia after decades of the same leadership. As a public servant for over ten years, we expect to hold our leaders accountable and guide us with integrity and transparency. I am blessed. This is not the end, but the beginning of what’s yet the best to come.”