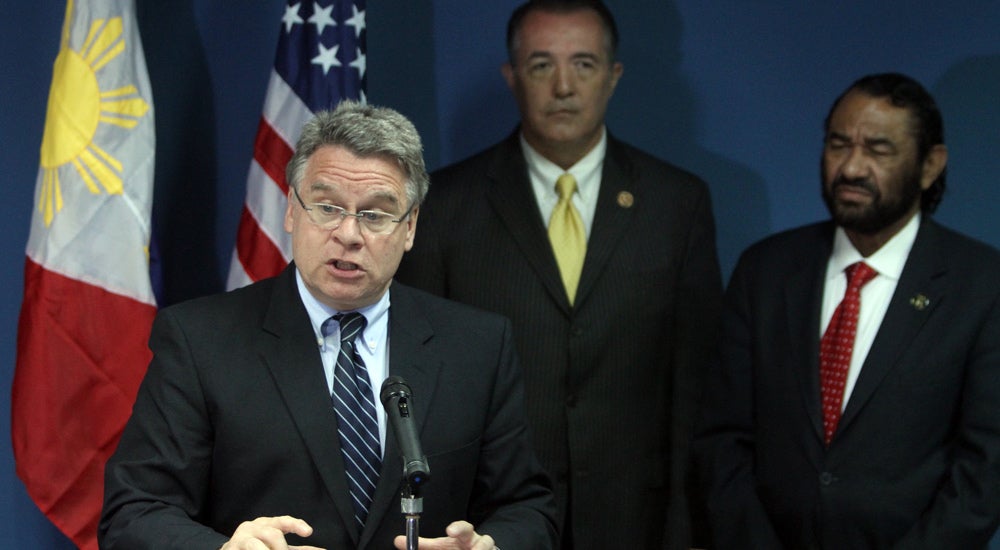 US Rep. Christopher Smith (right) speaks as Foreign Secretary Ramon del Rosario (not in photo), Reps. Trent Franks and Al Green listen at the Department of Foreign Affairs, Pasay City, on Monday, Nov. 25, 2013. The congressional delegation was here in the country to check on US typhoon relief operations. INQUIRER PHOTO/NIÑO JESUS ORBETA

MANILA, Philippines—Concerned about an “impending health crisis” in typhoon-ravaged Eastern Visayas, American lawmakers who saw the devastation firsthand in Tacloban City this week vowed to push for greater aid funding for the Philippines’ disaster response upon their return to Washington.

The British government, too, has promised to provide sustained support for the Philippines as the country begins to rebuild storm-devastated Eastern Visayas.

“We are prepared financially, and in attitude, and in our determination to do what is necessary to restore livelihoods and a more sustainable future,” Ahmad said.

“But we want to wait until the Philippine government signals clear areas of focus,” he said. “That would give us a clear green signal as to where international assistance is going to be most effective.”

Republican Representatives Christopher Smith (4th District, New Jersey) and Trent Franks (8th District, Arizona) and Democratic Rep. Al Green (9th District, Texas) promised to rally the Philippines’ cause in the US Congress and “get both sides of the aisle” to ensure sustained funding for increasing needs in the disaster area.

“This is a marathon more than a sprint,” Smith told the Inquirer in an interview at the US Embassy in Manila on Monday.

“We came as advocates, we leave as advocates to make sure the hard work of getting the requisite amount of money and support is sustainable. We can’t guarantee success, but we will certainly try,” said Smith, who headed the bipartisan US congressional delegation on a four-day visit here.

Smith, chair of the US House subcommittee on global health and human rights, said his group would mount their Philippine mission in a hearing on Dec. 3 and “we’re going to be looking for every way to support what’s being done here.”

The group will press greater aid to the Philippines despite other prevailing funding priorities—global response to the Syrian crisis is taking much of the pie for instance, said Smith—and while the American public is dealing with problems at home, most recently the Midwest tornadoes that hit less than two weeks after Supertyphoon “Yolanda” (international name: “Haiyan”) flattened entire communities in central Philippines on Nov. 8.

“We’ll make a report, have a hearing, which hopefully will garner some additional support. We’ll lay out exactly what the needs are. [We will then] make a report to the appropriations committee. We will physically exert an effort to get both sides of the aisle that this has to be adequately funded,” Smith said.

The United States is among the largest foreign donors to the typhoon relief effort, providing $51.857 million in aid by far through the US Agency for International Development (Usaid) and the US Department of Defense.

The US military has solved the relief effort’s logistical woes, with its ships and aircraft conveying much-needed supplies to typhoon-ravaged villages, including those that remained isolated for days after the storm.

Smith, whose group traveled to Tacloban on Sunday and met with the US team and other aid organizations, was particularly concerned about “another pending crisis”—an epidemic of diseases, including dengue and even cholera, borne by unsanitary conditions.

The group arrived in Manila on Saturday afternoon and left Tuesday morning.

“Dengue is a big probability within the next two weeks, and there are other diseases that loom…. The fear is that, just like in (earthquake-hit) Haiti and in other crises around the world, second and third shoes (assistance) would need to come particularly in terms of epidemics,” Smith said.

“If an epidemic occurs, like dengue and others, you know the need for antibiotics and other kinds of intervention is going to be huge,” he said.

Smith called attention to remaining debris in much of Tacloban, referring to it as a “harbinger of disease.”

Green, who has seen the impact of hurricanes, earthquakes and tsunamis in different parts of the world, had as much to say about living conditions he saw in the devastated city.

“I can tell you, I have not seen in any of the conditions that far exceed what I’ve seen here. It really ranks among the most horrific natural disasters I have seen. It is difficult for the tongue to explain here what the eyes have seen. You almost have to see it to disbelieve it,” Green said.

Smith, who counts the campaign against human trafficking among his leading advocacies, was also especially concerned about the women and children vulnerable to predators who take advantage of desperate conditions.

“Filipino women are being abused all over the world and, under cover of the chaos of the typhoon. The three of us and others [in the US Congress] remain deeply concerned that the exploiters, the pimps, the traffickers—especially now that roadways are being opened, ways by sea—could descend into the malaffected areas,” he said.

Smith said the call for greater US assistance for the Philippines will likely be taken up as “a continuing resolution to make sure that spicates of funds are adequately resourced to meet the need.”

He said he was optimistic that the US government would send further help, adding that funding “isn’t as big a problem as it could be” on the short term as the federal government was still in the early part of its fiscal cycle.

All in awe of the faith and determination of the survivors to rise above the disaster, the lawmakers promised to back the Philippines’ aid appeal.

“This has been an astonishing trip and we hope that we can go back now and be the best witnesses of the tragedy of this massive typhoon, how it has impacted the Filipino people, how they have responded and how it’s important for us to stand with them any way that we can,” said Franks, who spoke of having a special spot for the Philippines, his wife being a Filipino.

“It is true that we don’t have unlimited coffers, but we will do our very best… My parents taught me that in circumstances where you can’t do enough, do all that you can. So that’s my commitment,” Green said.

“I have visited some of the worst-hit areas and heard from survivors who have lost everything. I have seen how DFID (Department for International Development) and our military are delivering UK aid supplies to the most desperate parts of the Philippines and how our help is getting these people back on their feet,” Greening said in a statement.

“In the coming months the UK will be working hard to help build a better future for all the people of the Philippines, including girls and women who are often the ones who suffer disproportionally in the wake of crises like this,” she said.

South Korea also increased its assistance, sending 540 troops to help in relief and recovery efforts in Eastern Visayas on top of its $25 million (P1.09 billion) in assistance for emergency relief and long-term reconstruction.

The Korean Armed Forces contingent, composed of medical, recovery and engineering teams, “would be the second-largest overseas deployment” of South Korea since it became a member of the United Nations in 1991, the Korean Embassy in Manila said.

An advance assessment team arrived from South Korea on Tuesday to identify areas of deployment and needs to be dealt with.

“This movement of troops reflects the overwhelming sentiments of the Korean nation and people in their desire to help the typhoon survivors as they face the daunting task of rebuilding their community and their lives—a collective aspiration that has not lost intensity,” the embassy said in a statement.

The Korean government cited the Philippines’ role during the Korean War, where some 7,420 Filipino soldiers fought under the United Nations Command.

“Koreans have never forgotten the role that the Philippines played during the Korean War… Now that the Filipinos are in dire need, many Koreans see an opportunity to repay the sacrifice, bravery and heroism of the… Filipino soldiers. Korea is optimistic that the Philippines, especially those adversely affected by the typhoon, with the help of the international community, will quickly recover from this debacle,” the embassy said.

Canada’s Minister of International Development Christian Paradis is visiting the Philippines “to witness the situation on the ground firsthand, meet with local officials as well as Canadian and international humanitarian partners.”

Paradis, who arrived Tuesday and is leaving Thursday, is expected to visit typhoon-hit areas, including the cities of Tacloban, Ormoc and Roxas, “to survey the damage caused by the typhoon and visit Canadian-supported humanitarian initiatives that are assisting the most vulnerable.”

Canada has provided more than C$5 million, or P207.74 million, for the Philippine relief effort, in addition to relief supplies, including tents, blankets, shelter kits and water-purification tablets.