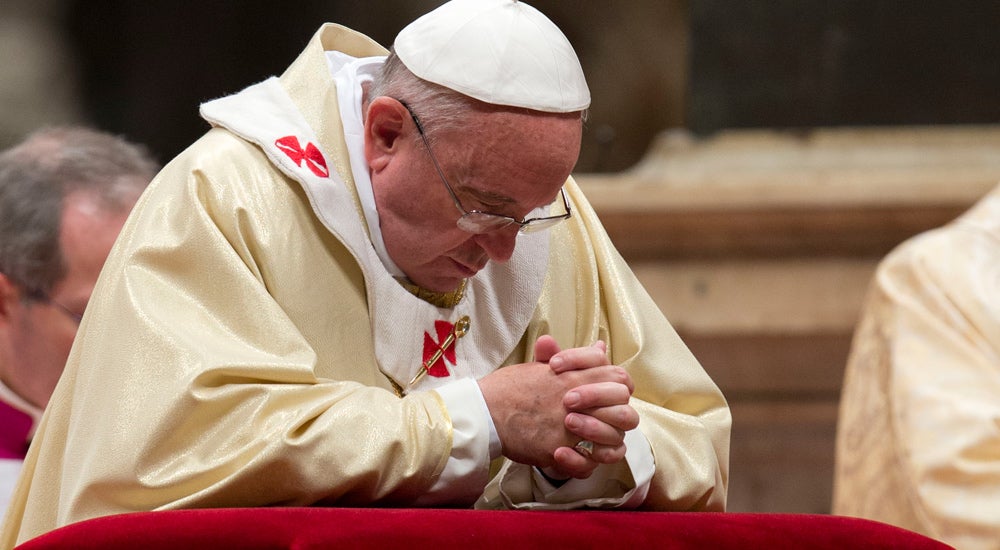 VATICAN CITY – Pope Francis prayed Thursday for the victims of the typhoon-ravaged Philippines at a ceremony to mark the unveiling of a mosaic image of the country’s youngest saint in St. Peter’s Basilica.

The ceremony was attended by Cardinal Luis Antonio Tagle, the Archbishop of Manila, who helped coordinate aid efforts after the storm, which left around 5,500 people dead or missing and 4.4 million homeless.

“I have been close to your people, I have seen how great the pain has been but also how strong the people have been,” Francis said in an improvised speech.

“Faith emerged from the ruins, it came from solidarity in the moment of hardship,” he added.

“In the moment of hardship, we ask why some things happen. In those moments of suffering, questioning prayers that do not ask for explanations but beg the Lord to accompany us are the most useful,” he said.

Pedro Calungsod, a 17th-century Filipino who was martyred at 17-years-old, was made a saint by Francis’s predecessor Benedict XVI last year.

Calungsod became the second saint in the country, where between 80 percent and 90 percent of the population are Catholic.

He was killed on the island of Guam in 1672 while trying to convert the local inhabitants and is considered the patron saint of the young in the Philippines.

The mosaic of his image depicts the saint as a young man with a martyr’s palm pressed to his chest.

Francis is expected to call on pilgrims on Sunday to donate money to help rescue efforts in the storm-hit country at a ceremony to mark the end of the Vatican’s “Year of Faith”.