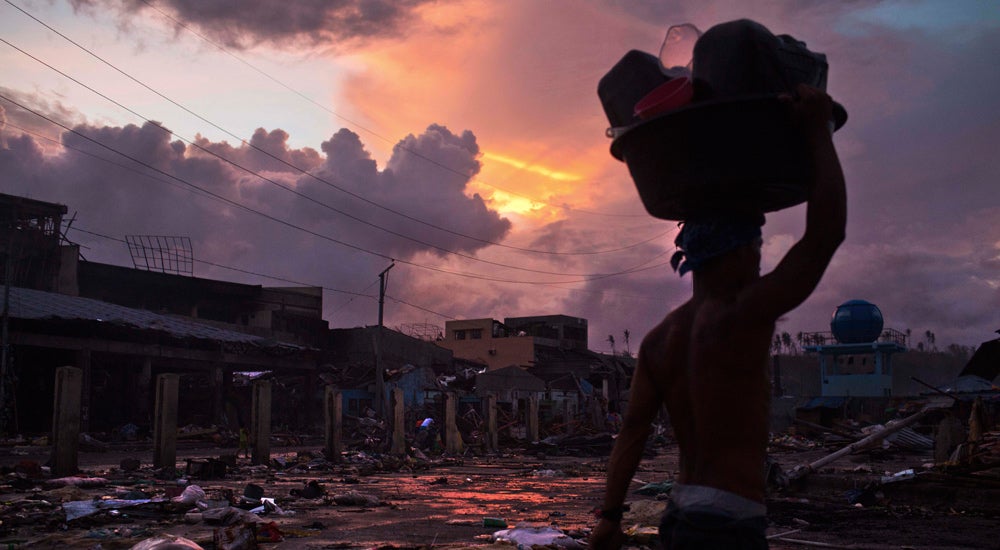 A Supertyphoon “Yolanda” survivor carries his belongings through the ruins of Tacloban City on his way back to his temporary shelter Wednesday, Nov. 20, 2013. A 2007 study funded by the United Nations Development Program foretold the impact of storm surges inundating the coastal communities of Leyte, its worst case scenario practically mirroring the devastation that Supertyphoon “Yolanda” wrought on the province two weeks ago. AP PHOTO/DAVID GUTTENFELDER

The study, which was disseminated to village leaders and school teachers in Leyte that year, raised the possibility of three- to six-meter storm surges inundating coastal villages, based on models of two of the biggest storms that struck the province before Yolanda, or “Haiyan,” its international name.

It designed a hazard model projecting the worst case of “the coastal barangays of Leyte [experiencing] a high level of storm surges ranging from 3.0 meters to 6.0 meters, where the actual surges were computed over the highest tide.”

According to reports post-Yolanda coming from Tacloban City and other coastal towns of Leyte, water levels in some areas reached six to seven meters, about the height of a two-story building, when Yolanda ripped through the province.

The study, “Storm Surge Hazard Mapping of Leyte,” was conducted by scientists from the Philippine Atmospheric, Geophysical and Astronomical Services Administration (Pagasa): Wilfredo Tuazon of the Instruments Development and Research Unit, Nestor Nimes of the Geophysics and Air-Sea Interaction Research Unit and Julie Nimes of the Atmospheric Sciences Research Unit.

It is part of a larger UNDP project called “Hazard Mapping and Assessment for Effective Community-Based Disaster Risk Management,” or the Ready Project, which covers 18 provinces vulnerable to natural hazards, including storm surges, earthquakes and landslides.

According to the study, the storm surge is the least known of the natural calamities regularly afflicting the country, but in many instances “is the most destructive and accounts for a significant fraction of the total damage.”

The authors define a “storm surge” as the abnormal and temporary rise in sea level at the coast produced by an intense tropical cyclone.”

“Like the tidal wave and tsunami, it is also a wave, but each is generated by different natural causes. While tsunami is associated with earthquakes and a tidal wave is the result of the gravitational attraction of the sun and the moon on the earth, a storm surge is generated by an intense tropical cyclone,” it said.

Strong winds and the lowering of atmospheric pressure associated with an intense tropical cyclone act as the main forces that produce storm surges, the study said.

In the Philippines, the recorded incidents of storm surges have been associated with the landfall or crossing of typhoons or storms. Tropical cyclones that exit from a land to the sea also generate storm surge, it said.

They also conducted surveys on historical storm surges associated with tropical storms or typhoons from the residents who lived at the target area for more than 20 years and were actually at the site during the onslaught of the typhoon or typhoons.