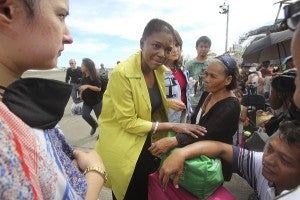 MANILA, Philippines—Returning to ground zero a week since she first saw a place stripped of almost everything, she found communities eager to rise up and begin again.

While noting remaining gaps in aid delivery, United Nations Under-Secretary General Valerie Amos, the world body’s humanitarian chief, could not help but be amazed at the spirit of the Filipino even as typhoon survivors faced the long road of getting back to how life was before.

“I continue to be struck by the resilience and spirit of Filipino people. Everywhere I visited, I saw families determined to rebuild their lives under the most difficult conditions,” said Amos in a presser in Makati City Tuesday night.

“So people are, of course, to an extent traumatized by what happened. They have lost loved ones, but at the same time they’re trying to look to the future,” said Amos, who first visited Tacloban City on Nov. 13.

Amos spoke to reporters upon flying back to Manila from her return trip to Tacloban City and other devastated parts of Samar, including the town of Guiuan, the first to bear the brunt of deadly “supertyphoon Yolanda” (international name Haiyan) on Nov. 8.

Around the disaster areas, Amos saw images of daily life juxtaposed in- and despite- a backdrop of devastation: the women were either cooking in makeshift kitchens or doing laundry while the men were clearing debris and scavenging for materials to rebuild their destroyed homes.

She shared a conversation with one carpenter looking to replace his lost tools to rebuild his house and restart his business again.

“What they are seeking to do is to rebuild their lives and get back to a position where their children are educated, where they’re able to work, where they have somewhere to live, where they’re healthy to being looked after and they can essentially support the rebuilding of their communities,” Amos said.

“That’s the spirit that I have got from the people I spoke with today,” she added, making reference to a “very different” face of the disaster zone on her second visit.

The official, who noted logistical challenges in aid delivery due to debris-clogged roads, fuel constraints and difficulties linking affected islands to relief hubs, noted an improved flow of assistance to affected families but called for greater attention to inland villages where help has not arrived.

“While much of the international focus has been on Tacloban, people need help in many other areas. There are areas further inland in the mountains on the many of the smaller islands that we have yet to reach,” said Amos.

Assessing the overall aid flow, Amos said the “relief operation has been scaled up significantly.” The change in pace followed delays last week given logistics hurdles and the magnitude of the disaster, which had prompted the official last week to admit that “we have let people down.”

“Every day, aid efforts gather pace with the systems getting through to more people. Significant food and medical assistance has been provided and water services, as well as limited telecommunications services, restored,” Amos said.

Based on UN estimates, some 1.1 million have received food aid since the disaster struck, still less than half of the estimated 2.5 million affected residents in need of food assistance.

Into the second week of operations on the ground, medical teams have seen an increasing number of patients with pre-existing diabetes and heart problems who have been lacking medication and care.

UN officials also expressed special concern for displaced children, citing their vulnerability to exploitation and trafficking given the loss of livelihood of their parents. The world body estimates that there are nearly five million children in disaster areas in need of emergency shelter, protection and psychosocial support.

“Children face the risk of separation from the parents, with their parents on the move looking for food for survival, they may leave children behind, this is where children are at risk. They are at risk of trafficking. This area is already at high risk of trafficking,” said Sarah Norton Stahl, child protection chief at the United Children’s Fund Philippines.

She said previous disasters had spawned a 10 percent rise in child trafficking as displaced families grappled with the lack of resources to survive.

She also cited the need to establish safe spaces for children, noting that 90 percent of daycare facilities in affected areas were destroyed.

“Establishing normalcy for children is hugely important particularly when they’ve already experienced so much psychosocial trauma, they’ve witnessed death and destruction in their homes , communities, and they really need those safe places to return to normalcy,” said Stahl.

The UN last week appealed for $301 million for a six-month action plan for disaster-hit areas in Eastern Visayas, covering the areas of food, shelter, water, hygiene and sanitation facilities, reconstruction and provision of livelihood, among others.

As of Wednesday night, Amos said $87 million of this amount had been filled by donations from around the world.

UN humanitarian chief continues to be amazed by Filipinos’ resiliency