Standing on a street in New York is a scary thing. For someone who is used to the way sunlight pools on green grass, warms the bark of trees to a warmer shade of brown, turns the golden heads of dandelions from weeds into beautiful flowers, it is weird to see the sky so white, a background screen for the metal and glass skyscrapers of the city. 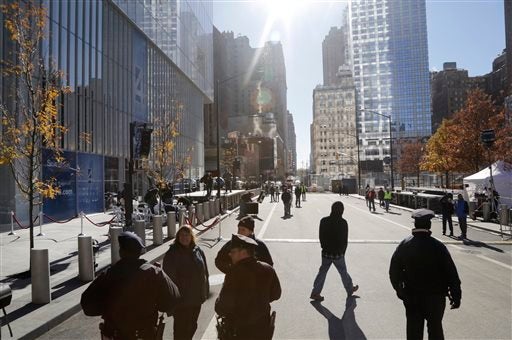 Not to mention, it is loud here. Cars move slowly, constantly inching their way around pedestrians, so there is not the whoosh sound of traffic. Instead, they make up for it by honking–continuing the eager conversation they’ve been having with the construction drills who grind their teeth against the street.

And yet, in spite of New York ’s alien look, sound and energy, I can understand why people are entranced by it. There’s something special about coming into contact with the crowds, the smells of different cuisines, the music of different passions that makes one feel as if she has been fully born into the world. On one hand, a person realizes that the architectural giants casting shadows over them are signs of their own smallness. On the other hand, the idea for the building, the construction of it, all of the business that goes on inside it is the work of man. In this place of extremes, one can be, simultaneously, conqueror and conquered.

It’s something I am incredibly lucky to experience. And while a lot of events have contributed to my admission into New York University–not the least of which has been an attention to my school work, and the support of my parents–if it weren’t for overcoming one obstacle, my own fear, than I wouldn’t have this chance to study the Big Apple as the setting of my own life, not just that of thousands of books and movies.

During my senior year of high school, I could probably have gone around tracing my comfort zone with a compass and some white chalk. I’d lived in the same town my entire life, had, more or less, stuck to the same school district, and while some of my friendships tended to ebb and flow, they usually followed slow transitions that stopped me from getting spooked. Which is why it came as an incredible shock to me–and to my nearest friends and family–when I made the decision to not only go to a school based in the “Capital of the World,” but to spend my freshman year in a study abroad program in London.

It had the feel of a spur-of-the-moment decision in spite of being a thought-out choice. My hopes of a future in publishing could only be realized if I could make connections, start interning, and be in a good place to get a job at one of the publishing houses after graduating. For that, I needed a big city. In addition, New York is a cultural center, where I would no doubt be exposed to greater minds, and more sophisticated writers, than I could otherwise have hoped to emulate.

Of course, it is still up in the air as to whether I will succeed or not— but for the moment I’m very happy with the world outside my comfort zone, with all these things and people I’ve always loved, but didn’t know that I loved because I hadn’t encountered them yet.

And I want others, especially teens, getting ready to embark on new stages in their lives to really consider this: It’s important to think through the consequences of our actions, to know their feel and weight as if they were a stone we were preparing to drop into the calm pond of our lives. And anything that comes as a big risk–to your health, to your self-esteem, to your moral values–might best be reconsidered.

But, if the only thing that is keeping you back from realizing a dream is a fear built more on itself than on reality, then be aware that the risk might come in the form of what you are passing up–all the things you are denying yourself. How many times have we heard clichés about life being too short? The truth is, it could stretch on forever–you could watch a million suns sink below the horizon and then inch upwards again–and yet, if you resign yourself to the same routine, and the familiar paths that you have already walked so many times as to have created a trench, then life is both forever and one day. It could go on endlessly because there are no new beginnings.

In the end, I don’t believe that life is too short. I believe it is too short not to do the things you want to do, to not pursue your dreams while they are available. Most of all, I believe that the best things this world has to offer are the ones that prove more important than our fear.