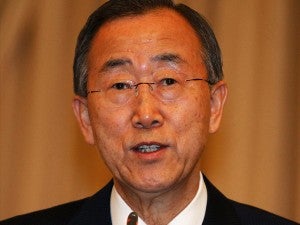 TALLINN—The secretary general of the United Nations (UN), Ban Ki-moon, said on Saturday the supertyphoon that killed thousands in the Philippines was an example of climate change and should serve as a warning to mankind.

Ban was speaking at Tallinn University in Estonia on a tour of several Baltic states before joining a second week of climate talks in Poland.

The UN chief said the world was facing a tipping point as countries thresh out a deal to be signed in 2015 to cut earth-warming greenhouse gas emissions.

The representative of the Philippines to that conference, Naderev “Yeb” Saño, is currently leading a protest fast to stress the urgency of unified global action to reverse climate change.

Said Ban: “We have seen now what has happened in the Philippines. It is an urgent warning,” he said, “an example of changed weather and how climate change is affecting all of us on earth.”

The Philippine death toll now stands at 3,681 and is expected to rise as more rescue-and-relief operatives comb areas in the central Philippines that was hit on Nov. 8 by Typhoon “Haiyan” (“Yolanda” in the Philippines), the strongest typhoon ever to hit land.

Climate change activists have linked the unprecedented strength of the typhoon to global warming.

While many experts are still hesitant to link extreme weather phenomena to climate change, the UN has said that rising sea levels make coastal populations more vulnerable to storm surges.

The World Meteorological Organization has estimated that 2013 was on course to be one of the hottest years since records began, with global sea levels reaching a record high.

The latest round of UN talks to set new climate goals comes amid warnings a 2009 aim to limit warming to an increase of 2 degrees Celsius in the average global temperature is growing ever more elusive.

In September, the UN’s Intergovernmental Panel on Climate Change predicted global surface temperatures could climb on average by as much as 4.8 degrees Celsius this century—a recipe for catastrophic heat waves, floods, droughts and sea level rise.

“We need action before it is too late,” said the UN chief, adding that a rise in temperatures would “affect us all.

The threat is very real, and we all have to take responsibility to stop it.”

Ban said the UN had put in place a scientific advisory board of at least 30 scientists who will begin work in February to help the UN make decisions on protecting global resources and addressing the climate change threat.

On the first day of the climate change conference in Warsaw, the Philippine envoy broke down in tears and announced he would fast until a “meaningful outcome is in sight.”

His emotional appeal was met with a standing ovation at the start of the two-week talks where more than 190 countries will try to lay the groundwork for a new pact to fight global warming.

“We can fix this. We can stop this madness. Right now, right here,” Saño said, adding that he would fast until the end of the conference to stress the urgency of the matter.