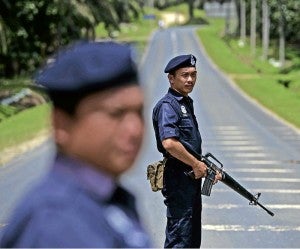 KUALA LUMPUR—Malaysian police said on Saturday an Al-Qaeda linked terror group from the Philippines was believed to be behind the killing of a Taiwanese tourist and the kidnapping of his wife.

The incident — in a remote part that was rocked earlier this year by a bloody incursion by the followers of Sulu Sultan Jamalul Kiram III — has underlined continued threats in the region despite a Malaysian security clampdown.

Police chief Khalid Abu Bakar said the Islamist extremist group Abu Sayyaf was suspected to be behind the attack.

“We believe the terrorists were able to slip in because there has been a big mobilisation of resources of the Philippine armed forces from the country’s south to the north to help out in relief work for victims of Super Typhoon Haiyan,” he was quoted by national news agency Bernama as saying.

The record-breaking typhoon, which hit the Philippines eight days ago has left thousands dead and affected millions.

Khalid added the attackers were believed to have come in a group of eight in a speedboat.

Authorities are still trying to find the kidnapped woman with help from their Philippines counterparts, he said.

Another police official confirmed his remarks to AFP but declined to comment further.

Funded by the late Al-Qaeda mastermind Osama bin Laden in the 1990s, Abu Sayyaf has targeted foreigners with kidnappings for ransom and has been accused of most of the Philippines’ deadliest insurgent attacks.

They have also been blamed for a 2000 cross-border raid on Malaysia’s Sipadan island, near Pom Pom, when 21 mostly Western holidaymakers were seized and taken to the Philippines. They were later ransomed.

The southern Philippines is just a short boat ride away from Sabah’s east coast.

More than 200 heavily-armed fighters landed by boat along the same stretch in February in a bizarre bid to support a self-proclaimed Philippine sultan who had staked a claim to the area.

After a nearly month-long stand-off, Malaysian armed forces moved in to clear out the guerrillas, leaving dozens dead. Their leader died last month of organ failure in a Manila hospital at the age of 75.