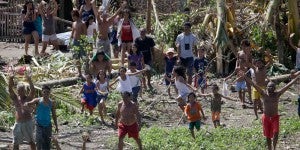 Villagers, isolated by super typhoon Haiyan a week ago, scramble for relief goods being dropped by Philippine Air Force at La Paz, Leyte province in central Philippines, Friday Nov. 15, 2013. Survivors of Typhoon Haiyan, one of the most powerful typhoons ever recorded, have only now begun to receive some aid, a week after their homes and lives were torn apart. AP FILE PHOTO

The technology, which was developed after the huge tsunami that hit Japan in 2011, allows doctors to take a look inside patients instantly, and even lets them enlarge the image with familiar iPad gestures.

Joji Tomioka, coordinator of the Japan Medical Team for Disaster Relief, said the system had been created in response to what doctors needed in the aftermath of the Japanese disaster.

“This is the first time that we are deploying it in a disaster situation,” Tomioka told Agence France-Presse at a modern tent medical clinic put up by the Japanese government to help victims of the typhoon, which crashed through the central Philippines on November 8.

At the partly air-conditioned clinic in the ruined city of Tacloban on Leyte island, a radiologist placed a camera on the chest of 72-year-old Carlos Llosa as he sat in his wheelchair.

The X-ray image was instantaneously transmitted through a wireless router to an iPad and to a nearby laptop.

With a thumb and a finger, the doctor was able to zoom in for a more detailed view of the problem area.

“It looks like he has tuberculosis,” Tomioka said after looking at the image as the patient was wheeled out.

Tomioka said Japanese medical experts are seeing about 200 patients a day as part of a large international aid effort to reach the estimated 13 million people affected by one of the most powerful storms ever recorded.

The National Disaster Risk Reduction and Management Council in the Philippines says 3,633 people are now reported to have died when the ferocious storm hit.

“The Philippines helped us during our hour of need in the tsunami,” Tomioka said, referring to the global outpouring of sympathy in the aftermath of a catastrophe that cost 18,000 lives.

Japan said Friday it was tripling its emergency aid package for the Philippines to more than $30 million, and was sending up to 1,000 troops to help with relief efforts.

It is expected to be the first time that Japanese troops are active in Leyte since the island turned into one of the biggest battlegrounds of World War II, when US forces counter-invaded in 1944.

Tacloban was the first Philippine city to be liberated from Japan’s occupying forces.