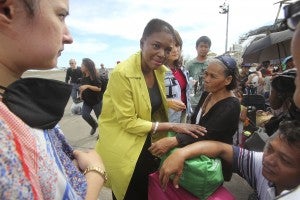 MANILA, Philippines – The United Nations humanitarian chief said Thursday that quicker delivery of aid has become the top priority in disaster-stricken Eastern Visayas, acknowledging the staggering logistics challenge, given the sheer scale of the calamity and difficulties in transport due to debris-clogged roads, bad weather and fuel constraints.

The UN said air drops have also been considered in Tacloban, worst hit by “supertyphoon Yolanda” (international name Haiyan), in order to speed up the delivery of aid as officials admitted that aid has not reached isolated areas.

“The situation is dismal… People are extremely vulnerable and desperate for help. We need to get assistance to them now. Ensuring faster delivery [of aid] is our immediate priority,” said UN Under Secretary General Valerie Amos in a press conference.

“The immediate priority for the humanitarian agencies over the next few days is to scale up the relief operation on the ground,” said Amos, who briefed the media following her visit to Tacloban City on Wednesday, where she herself had to bear delays in her return flight to Manila.

The Philippine government has been criticized for the slow delivery of assistance despite an outpouring of international support to the Philippines almost a week since the disaster, among the worst to hit the country.

Asked about this, Amos acknowledged that aid has not reached certain areas.

“There are still areas that we have not been able to get to, where people are in desperate need. And I hope that in next 48 hours that will change significantly,” Amos said.

“We are all extremely distressed that this is day six and we have not reached everyone,” she said.

She added: “Yes, I do feel we have let people down because we have not been able to get in more quickly.”

UN Resident and Humanitarian Coordinator in the Philippines Luiza Carvalho said air drops have been considered as a method to reach the most isolated places. She said reports of looting were “common” in the initial stages of a disaster of such magnitude.

“These are not hampering our operations,” she said in an interview.

The UN has appealed for some $301 million in aid for the provision of life-saving assistance to some 11.5 million affected people in Eastern Visayas for six months. Priority areas for this include food, shelter water, hygiene and sanitation.