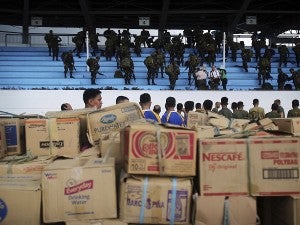 SYDNEY, Australia – Australia pledged Thursday a further Aus$20 million (US$18.7 million) for relief efforts in the battered Philippines and said it will deploy extra defense staff to help deal with the disaster.

The funding hike takes Australia’s contribution to Aus$30 million in the wake of Super Typhoon Haiyan, which devastated parts of the country, destroying life, property and infrastructure.

“As a good friend and neighbor, Australia stands beside the Philippines as it deals with this humanitarian disaster,” Prime Minister Tony Abbott’s office said in a statement.

Two Australian aircraft are already in the Philippines, arriving on Wednesday evening to transport doctors, paramedics and medical equipment from Cebu to worst-hit Tacloban.

The statement said another C-130 Hercules transport aircraft would leave soon, with a fourth plane on standby, while the amphibious landing vessel HMAS Tobruk was being diverted to the Philippines.