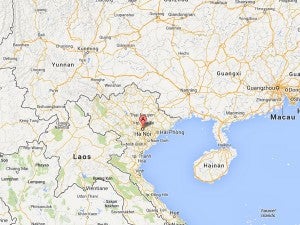 HANOI, Vietnam- The critically endangered twin-horned saola has been sighted in Vietnam for the first time in over a decade, raising hopes of recovery for the mysterious animal, conservationists said Wednesday.

Known as the “Asian Unicorn” for its extreme elusiveness, the antelope-like creature was spotted in September using a camera trap set by WWF and the communist country’s government in Vietnam’s central Annamite mountains.

“When our team first looked at the photos we couldn’t believe our eyes. Saola are the holy grail for South East Asian conservationists so there was a lot of excitement,” said Van Ngoc Thinh, WWF Vietnam’s country director.

“This is a breathtaking discovery and renews hope for the recovery of the species,” he said in a statement.

Saola, which were only discovered in 1992, have two parallel horns with sharp ends which can reach 50 centimeters in length (20 inches).

One of the secretive creatures was seen in August 2010 — the first sighting in a decade — but it died a few days after it was captured by villagers in Laos, according to the International Union for Conservation of Nature.

It was the first time a wild saola had been spotted since one was captured on camera in 1999 in Laos.

Dang Dinh Nguyen, Deputy Head of Quang Nam Forest Protection Department, said the last sighting of a saola in Vietnam was in 1998.

He said the latest appearance of the animal was “an historic moment” and showed that conservation efforts in the critical saola habitat were effective.

Conservationists believe there could be only a few dozen surviving in the wild, with best-case estimates ranging to several hundred.

In the area where the saola was sighted, the WWF runs a law enforcement program which recruits forest guards from the local community to prevent illegal hunting.

Since 2011, the forest guards have removed 30,000 snares and destroyed more than 600 illegal hunters’ camps.

“Confirmation of the presence of the saola in this area is a testament to the dedicated and tireless efforts of these forest guards,” said Thinh.

When it was found two decades ago the saola was “the first large mammal new to science in more than 50 years and one of the most spectacular species discoveries of the 20th century,” WWF said.