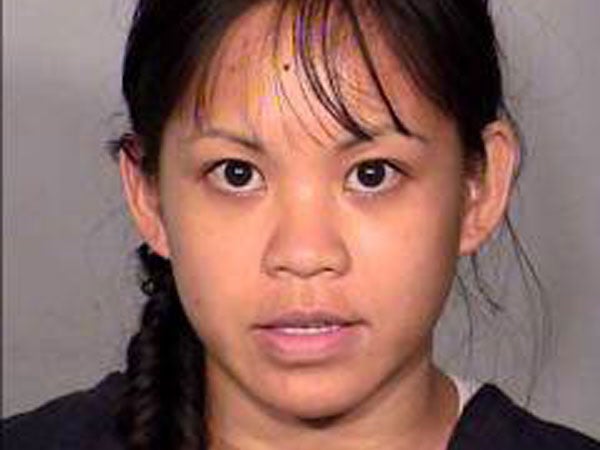 LAS VEGAS – A Clark County grand jury has indicted a Filipina accused of stabbing to death her sister-in-law and the woman’s unborn child.

The indictment returned, on Friday, Nov. 8, means that Elinor Indico, 30, will likely face a jury trial for the death of Ashley Indico, who was nine months pregnant when she was killed on Oct. 17.

Indico was indicted for murder with a deadly weapon, manslaughter and child abuse, neglect and endangerment. Her bail of $120,000 was dropped and she was ordered held in county jail without bail.

Her next court appearance is scheduled for Nov. 19. She could face the death penalty.

According to the charge sheet, Elinor Indico stabbed Ashley Indico after the two had a fight in the North Las Vegas apartment that they were sharing.

Elinor Indico, whose family members said has a history of violence and drug problems, was being asked to move out of the apartment.

Ashley’s husband, Aristeo Indico, is the brother of Elinor Indico. On the day of the stabbing, Elinor Indico had an argument with Ashley Indico, resulting in a fight in which both women were injured.

According to the Clark County Coroner’s Office, Ashley Indico sustained stab wounds in her neck, the back of her arm and her ankle.

Police, who responded to calls from neighbors, said they found Elinor Indico bleeding from minor wounds. She claimed she acted in self-defense when her sister-in-law attacked her.

At the time of the incident, Ashley Indico’s two other younger children—a five-year old son and a three-year-old daughter—were home. It was the boy who called neighbors, telling them his “mom was bleeding,” police said.

The presence of the children in the house during the killing forced prosecutors to add the charge of child abuse, neglect and endangerment to murder and manslaughter. That also prompted Judge Linda Bell to hold Indico without bail.

The case has affected the large Filipino-American community here in Las Vegas. Although Ashley Indico is not Filipino, the tragedy has hit home.

A Facebook page created to raise funds for Ashley Indico’s funeral and for the children raised nearly $3,000. She was laid to rest in California on Nov. 7.

Read Next
Where to donate in N. America for ‘Yolanda’ relief
EDITORS' PICK
Complete your early Christmas shopping with vivo V25 Series
The vivo Y16 makes the season of giving more thoughtful for the whole family
What’s in a name? ‘Maharlika’ evokes time of mythmaking
House energy committee chair Arroyo bats for cheap electricity
Easterlies to bring rain in PH on Sunday — Pagasa
China’s Xi unwilling to accept vaccines despite threat from protests — US intel
MOST READ
Maxene Magalona sees separation from Rob Mananquil as ‘blessing in disguise’: ‘There’s no more anger’
What’s in a name? ‘Maharlika’ evokes time of mythmaking
Are we ready for a sovereign wealth fund?
NBA: Warriors use 3-point barrage to ground Rockets
Don't miss out on the latest news and information.