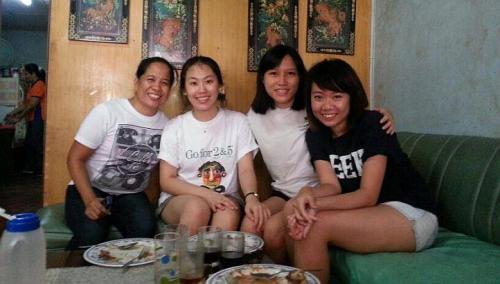 Vanessa Chong Yuting, (second from left), Alyssa Chee Pui Yee (third from left), Eileen Heng Mei Ting (right). The three Singaporean students in Tacloban City, Philippines, who could not be reached over the weekend since Supertyphoon ‘Yolanda’ hit the city have been found and are safe, said their school. PHOTO: FAMILY OF VANESSA CHONG

SINGAPORE—The three Singaporean students in Tacloban City who could not be reached over the weekend since Supertyphoon “Yolanda” (Haiyan) hit the central Philippine city have been found safe, said their school.

In an official response to queries from The Straits Times, Flinders University Acting Vice-Chancellor, Professor Andrew Parkin said that the school “is delighted that the three Flinders students who were in the typhoon-affected area of the Philippines have been found safe and well”.

“We have been in regular contact with the families of the three students over the weekend. The University is investigating options to expedite the return of the students to their families in Singapore as soon as possible,” he added.

INQUIRER.net previously listed the three as among the unaccounted persons in Leyte and Samar.