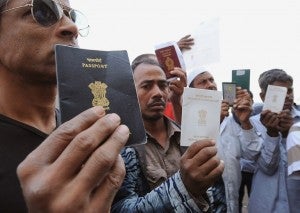 Foreign workers show their passports as they gather outside a Saudi immigration office waiting for an exit permit as Saudi security begin their search campaign against illegal laborers, on November 4, 2013 in downtown of Riyadh. A new four-month deadline ends for illegal foreign workers to regularise their status, leave the country, or risk imprisonment. AFP FILE PHOTO

MANILA, Philippines — Teams from the Philippines Consulate and the Philippine Overseas Labor Office (POLO) in Saudi Arabia will be making the rounds of jails and deportation centers for Filipinos who may have been apprehended following a government crackdown of illegal immigrants in that country, a spokesman for the Department of Foreign Affairs said Wednesday.

“The Saudi government has issued a new set of rules on foreign workers who violate Saudi labor and residency laws after the grace period has expired,” Raul Hernandez told reporters in a press briefing.

“Violators will be apprehended, penalized, and deported… [Overseas Filipino Workers are] advised to follow all rules and regulations at all times. They should coordinate with their respected employers and make sure [they have proper documentation],” he said.

The Saudi government swooped down on illegal migrants after the grace period for them to leave expired November 3.

Hernandez said that some 1,500 OFWs were still awaiting their exit visas.

“So far no Filipino has been arrested in view of the implementation of the new rules,” he said.

“With the new rules that were pronounced it appears the Saudi government is very serious in apprehending violators of labor and residency laws,” Hernandez said.

There is an estimated 108,000 undocumented Filipino workers in Saudi Arabia, according to the Commission on Filipino Overseas while the Philippine Embassy in Riyadh recorded 660,000 legal OFWs.

The DFA has so far issued travel documents to 11,000 illegal OFWs, according to DFA Secretary Albert del Rosario. Around 5,000 have been repatriated while 1,600 are awaiting clearance from immigration.

No Filipinos arrested in Saudi crackdown vs illegal foreign workers–DFA