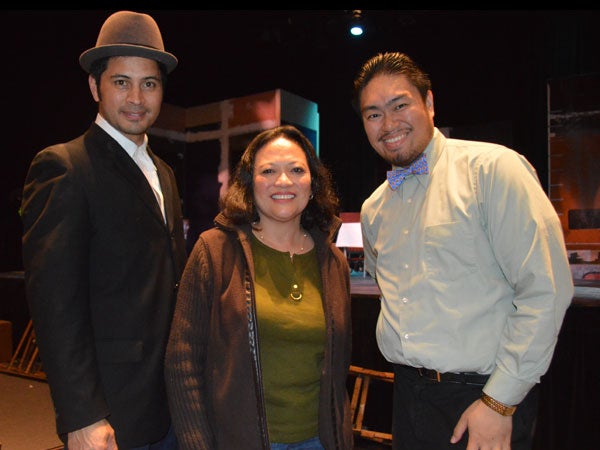 (Left to right) Rafael Musni, Edna Austria-Rodis and Rogil Birco star in “You Can’t Take It With You.” PHOTO BY RODEL RODIS

SAN FRANCISCO—Three Filipino Americans in leading roles along with a Filipino-American assistant director are at the center of City College of San Francisco’s Theatre Arts Department’s revival of the classic Broadway comedy “You Can’t Take It with You” by George Kaufman and Moss Hart.

The highly acclaimed Broadway play won the Pulitzer Prize for drama in 1937 and its movie version garnered the Best Picture and Best Director (Frank Capra) Oscars in1938.

The play in three acts covers the lives of the liberal, free-thinking Sycamore family and the chaos that erupts when their daughter’s fiancé invites his conservative, Wall Street parents to the Sycamore home for dinner on the wrong night.

The multicultural cast of 19 characters includes Edna Austria Rodis, who plays Penelope “Penny” Sycamore, the eccentric mother of the Sycamore family. Penny’s hobbies include writing plays and painting because they give her pleasure. She is always concerned about making everyone in her large household happy.

A registered nurse who served as president of the Philippine Nurses Association of Northern California, Edna Rodis has performed in previous City College plays directed by Susan Jackson including the lead role of Amanda Winfield in Tennessee Williams’ “The Glass Menagerie,” which was presented for six nights at the Diego Rivera Theater in October of 2011.

Rodis also acted in other City College productions like “The Night of the Iguana” and “Guys and Dolls.” Her theatre experience began with playing various roles in the 2001-2003 productions of Eve Ensler’s“The Vagina Monologues” produced by the Filipina Women’s Network.

Birco is in the music and sound design for visual media graduate program at Academy of Art University and is studying acting at City College of San Francisco. He has B.A. German (2006) and a B.A. Music (2007) degrees from San Francisco State University and an M.A. Psychological Studies (2013) from the California Institute of Integral Studies.

Rafael Musni plays Boris Kolenkhov, a Russian count who fled to America to escape the Russian Revolution. He is the patient ballet instructor of Essie, Penny’s daughter and Ed’s wife, who shows no talent for dancing.

A native of San Francisco, Rafael Musni went to St. Ignatius College Preparatory before graduating from San Francisco State University, majoring in Film Studies. As part of his professional development, he is a theater major as SF City College where his self-directed “home work” includes auditions, shooting with Discovery Channel productions, and singing show-tunes and standards at the open mike at the venerable piano bar, Martunis

Assistant Director Feliks Grimsrud describes himself as a “transgender male”, born and raised in San Francisco. He is currently attending City College, majoring in Theater “with a mind to take up a minor in science and/or history”. He grew up in an all-Filipino household with his mother and grandfather. He has been to the Philippines many times before and has a proficient amount of knowledge in the language and the culture.

With this production, the play’s director, Susan Jackson, celebrates her 30th anniversary as a City College instructor. Aside from directing plays, Susan is also a renowned actress and a playwright. She most recently appeared over the summer in the title role of Joan Crawford in “The Gorgeous Hussy” at San Jose State University. She has performed leading roles in “Wit” and “Who’s Afraid of Virginia Woolf?” Her recent play, “Blessing Her Heart” won the Bay Area Theater Critics Circle Award.

General Admission is $15, students and seniors, $10.  For directions to the Diego Rivera Theater, log on to www.ccsf.edu/Info/Map/theatre.shtml#6.