MANILA, Philippines – Newly crowned Miss World Megan Young escaped injury when the second floor of an orphanage in Port Au Prince she was visiting last week collapsed, according to a report on the official website of Miss World.

The sudden rush of 78 children towards Young may have caused the floor to cave in, bringing down the children, Young and Miss World CEO Julia Morley eight to 10 feet below.

While Young was unhurt and, Morley and one of the children suffered from hip and leg fractures.

“Despite the shock of the fall, Megan held on to her Miss World crown as the building collapsed around her. Miraculously, Megan ensured that the Crown remained undamaged despite all that was going on,” the statement said of the incident last Thursday.

A few days after the accident, Young, who is currently in the United States with her family, posted over Twitter early Tuesday: “Thankful. So thankful…”

Young said the accident was “such a scary situation,” saying it was the first time that she figured in something like this.

“We had all fallen down, but I was still on my feet. I had the crown in one hand and the other hand instinctively holding up one of the decks in place with two people. There were lots of kids under the decks still and we just instinctively held on. It was such a scary situation for me. It makes you realise there is so much more that should be done for these kids. It’s not the only orphanage out here in Port au Prince, and I am sure others are in a similar state,” she told the staff of Miss World as quoted in the release.

“We went into the orphanage hoping for a good day. I was happy that day and the children we were with seemed so full of energy and joy. We get onto this second floor platform, and we aren’t even there for a minute and we hear a crack and everybody falls through,” she added.

The newly-crowned Miss World pointed out that the unfortunate incident was “real eye opener.” 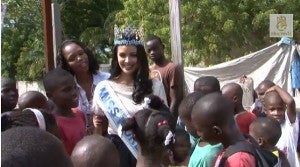 “It just shows how much work needs to be done in Haiti. I want to go back and continue with the work that we have started, and make sure nothing like this can happen again,” she said.

Miss World CEO, Morley, said in the release: “I heard a loud crack and then the floor started to slide. My first thought was for the children and Megan. As I fell through, I remember catching some of the younger kids and breaking their fall. I landed on my feet but with the extra weight of the kids I fell back. Then came the intense pain and I knew something was seriously wrong.”

Young became the first Filipina to be crowned Miss World September 28, besting over 100 beauty queens from other countries.

She went home to Manila in October before flying out again to fulfill her duties as Miss World.