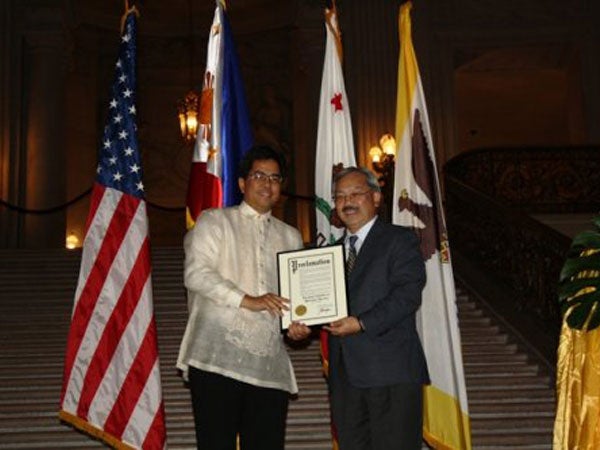 San Francisco, California—After a month long celebration, the Filipino American History Month culminated on Oct. 30 with a special recognition given to five outstanding Fil-Ams for exemplary contributions in their respective districts.

In addressing the Fil-Am community, Mayor Lee extolled the importance of recognizing the history of immigrants “not just individuals who make the headlines, but also the working-class neighborhoods.”

“Mabuhay! (Long Live!),” Mayor Lee said during his opening remarks. “As manager of the city, it’s not just about building jobs, it is important to make sure the city recognizes the history of immigrants.”

The first ever Asian-American to head the city as mayor, Lee has 23 years of public service and administration skills that have helped spur the economy including in the areas of park development, transportation, housing, education and public safety.

Saying he was told “No jokes tonight,” Mayor Lee remarked, “Filipinos helped us build the Golden Gate Bridge—let’s not forget that—by the hands of immigrants and people who worked hard. “

And because it is reflective of the city, the city mayor said that is the reason why some streets were named after Filipino heroes. “People will ask me who is Rizal, Bonifacio or Mabini?” Thus, he often replied, “They were very special.”

He likewise cited a well-known Fil-Am—Victoria Manalo Draves, for her enthusiasm in sports where she became part of the city’s history.

“But part of my job is to reach out to communities…we need more people from the Philippine community to serve milestones,” he stressed, as he pointed to Mendoza as one example from the Fil-Am community, who now serves under his office as education advisor.

“We have Hydra Mendoza, my advisor. Many Filipinos who don’t go to public schools should avail of our services. “

He said, “I ask you to continue to make sure the Filipino leaders and the community serve not only as ambassadors but to manage the city of San Francisco. “

Ascalon expressed his deepest appreciation to the Mayor’s Office, especially Mayor Lee, as he closed the monthlong commemoration of the Filipino American History Month.

“This is a monthlong learning where our exhibit exemplified the community’s role starting from farm to table to the passing of Assembly Bill 123—the Fil-Am involvement in the Farm Labor Movement,” Ascalon said.

“Fil-Ams are not just ethnic, they are Americans—desiring to be recognized,” he said.

The San Francisco Filipino Cultural Center’s board of directors, meanwhile, announced the building of a cultural center space located between Mission and 4th Streets in District 6’s South of Market neighborhood. Projected inaugural opening is March 2014.

Supervisor John Abalos (SF-District 2), the city’s district with the largest Fil-Am population, awarded Dory Camino for her marketing, communication and social contribution to the district.

“Dory Camino’s father, Antonio, is a first-generation Filipino-American in San Francisco,” Abalos said, “He used to be a janitor in Westborough High School in Daly City.”

District 6 Supervisor Jay Kim, recognized Rey Cayetano, another Fil-Am, who was awarded by The Guardian as 2011 winner in Film Photography and Arts, for his inspiring photo exhibits in the district.

In District 5, Supervisor Eric Wang awarded the group Kasamahan Organization for its contribution to the community with impact on social justice.

District 4 Supervisor Cathy Tang honored Raymond Portado for his commitment to the youth or the younger population by sharing his talent in the arts.

Supervisor David Chiu recognized Genevieve Jopanda, executive director of Hepa B Free campaign in the city, for her monumental achievement and dedication in championing public health. The Hepa B program provides free and low-cost vaccines and free health education to individuals and families.