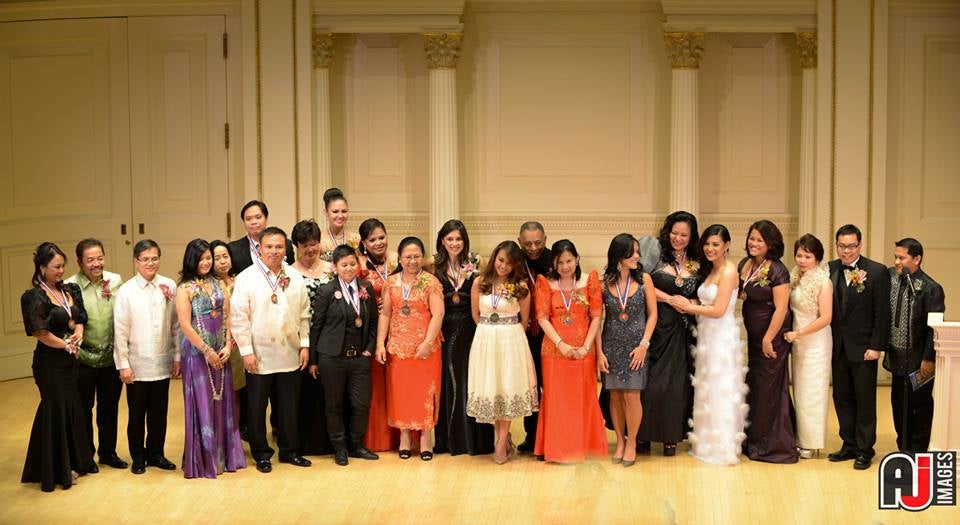 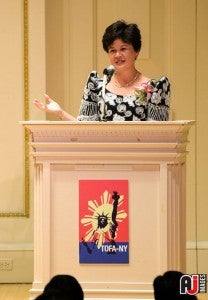 NEW YORK—In a fitting culmination to Filipino American Heritage Month, this year’s The Outstanding Filipino Americans in New York (TOFA-NY) gala was a night of re-creating, re-enacting and reconnecting with Filipino roots.

Judge Lorna Schofield of the Southern District of New York, a keynote speaker, recalled memories of her mother, Priscilla Tiongco, who as a young Filipina married a US Air Force pilot after the war and came to the US. Through the blur of fraying photographs and college transcripts, the first Filipino-American federal judge remembered affectionately her mother’s distinct qualities.

“She was very strict and had a ferocious temper” and constantly reminded Schofield to get straight As and to practice the piano. “She used to punish me, but when I read her transcripts, she didn’t get all As,” Schofield recalled with fondness.

“King of Latin Soul” Joe Bataan sang his composition “Afro Filipino,” which he dedicated to his Filipino father. He said the succession of accolades he has received this year alone has reconnected him, although belatedly, with his “great Filipino legacy.”

The evening program at Carnegie Hall opened with youngsters from the Philippine community of Southern New Jersey dancing the “tinikling,” mish-mashing the traditional with hiphop and Gangnam Style moves.

It was a rousingly applauded number. It was entertainment made even more memorable by the performances of Kirby Asunto, Christine Joyce Lam, Jared Martin, John Pio, April Talangbayan and Lani Misalucha.

There is an “air of excitement” every time October or the Filipino American Heritage Month comes around, noted Consul General Mario de Leon Jr. He said TOFA-NY recognizes the “brightest and most committed” in the Filipino community’s “wealth of human resources,” a tradition the organizers have tried to preserve.

Special mention was made of the TOFA-NY process of voting via social media.” The power of online participation,” said De Leon, “shows that we Filipino-Americans celebrate each other’s triumphs and achievements.” 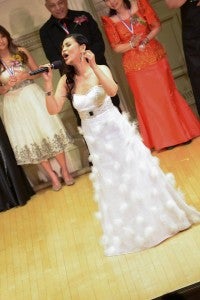 Lani Misalucha caps the night with a finale number. PHOTOS BY ARMAN AND JOYCE DAVID/AJ IMAGES

The winners recalled their personal immigration stories in their speeches.

“When I came here to the States, I knew only a few words,” said WNBC reporter Katherine Creag, winner for Media and Publishing. “Fast-forward to today, it always amazes me to think I ended up a journalist.”

Maya Rowencak, founder of Maya’s Hope, which raises funds for Philippine orphanages, dedicated her Community Service & Advocacy award to her Filipino mother who taught her how to eat fish head.

Particularly moving was Jen Furer’s speech offering her Courage of Conviction award to her family which, after living in the US for 20 years, was “detained, deported and banned from returning.”

“My family may be out of status, but they were never out of courage,” she said near tears, her voice quavering. “Out of Status” is the title of her memoir where she documents her family’s struggles with the US immigration system.

Speakers advanced their personal advocacies in their acceptance speeches.

Irma Bajar dedicated her LGBT Advocacy award to all gay Filipinos who have been “bullied, beaten, abandoned, murdered and isolated from their families.” As a queer Filipina, she told The FilAm she had experienced being a victim of a hate crime. She would like, she said, for the award to serve as an inspiration to those who face discrimination because of their gender choice.

Esperanza Garcia (Youth and Sports) called on the youth to never waver in their support of a sustainable future; lawyer Rio Guerrero (Public Service & Politics) equated ‘pro bono’ service to Filipinos helping fellow Filipinos; Menchu Sanchez (Health Care) said she hoped her story would call attention to the work of nurses not only in New York but around the world; and Marietta Geraldino (Education, Research & Technology) said her award celebrates the impact of FilAm teachers in the lives of young children.

Others gave a simple statement of personal thanks. Aris Tuazon (Food & Restaurants) used the power of irony to thank a high-school teacher who dashed his Big Dreams; Sibyl Santiago (Arts & Culture) thanked her mother, the actress Lorli Villanueva, through whom she had experienced “life in film…in front and behind the camera.”

Journalist Ruben Nepales, one of the keynote speakers, urged Filipinos to keep aspiring to excel. “Let’s continue to break glass ceilings until there are no more glass ceilings to be broken,” said the former chairman of the Hollywood Foreign Press Association.

Speaking on behalf of the TOFA-NY board and producers, founder Elton Lugay congratulated all winners for being models of courage and professionalism, hard work and dedicated service.

“You are all beyond awesome,” he said.