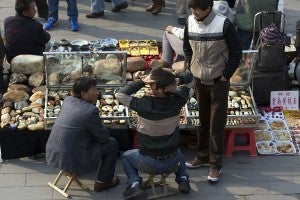 BEIJING—An Uighur group on Thursday dismissed Beijing’s account of a “terrorist attack” at Tiananmen Square as a dubious pretext to repress the ethnic minority, as state-run media hinted at potential repercussions.

Beijing police said on Wednesday that Usmen Hasan—in an SUV (sport utility vehicle) carrying his mother and wife, jihadist banners and machetes—sped onto the pavement, crashed in Tiananmen Square and set the car alight on Monday.

The crash in the symbolic heart of the Chinese state killed all three people in the car and two tourists, including a Filipino woman, with 40 others injured.

Five other suspects with Uighur-sounding names were captured within 10 hours, although police only announced their detention two days later.

The mostly Muslim Uighur minority are concentrated in China’s far western region of Xinjiang, where ethnic tensions and discontent with the government periodically burst out into violence.

Beijing regularly calls such incidents “terrorism” but Uighur organizations dismiss that as an excuse to justify religious and security restrictions, and information in the area is tightly controlled.

Alim Seytoff, a US-based spokesman for the overseas World Uyghur Congress (WUC), said the official narrative of the Tiananmen event was full of holes and discriminatory.

“The Chinese claim is in a way very unbelievable, to some extent outrageous,” he told Agence France-Presse. “The only reason this is labeled a terrorist incident is because the passengers happened to be Uighurs.”

Seytoff questioned why an attacker would kill his own family and how religious material could survive in a car engulfed in flames.

“If [Hasan] were a terrorist, why would he bring his mother and his wife?” Seytoff said.

“The car was burned almost to the ground, the three people were burned to death and the flag wasn’t burned—in the car?”

The account fit what Seytoff called a pattern of authorities labeling Uighurs terrorists based on “thin evidence.”

“We do not believe there is any kind of organized resistance against Chinese rule,” he said. “Some of the violence by Uighurs—they are more sporadic, individualistic, out of desperation.”

According to Chinese state-run media, a “terrorist attack” in Xinjiang left 35 people dead in June and 139 people have been arrested in recent months for spreading jihadist ideology.

Ethnic tensions have risen in Xinjiang since millions of members of China’s Han majority have moved to the resource-rich region, where they largely control the economy. Rioting in the capital Urumqi involving both ethnic groups in 2009 left 200 people dead.

Seytoff warned Uighurs could face tighter repression after Monday’s incident, particularly in the capital, where the WUC said 93 people had been rounded up.

Security had been bolstered across Xinjiang, where officers already maintained checkpoints, broke up small gatherings and raided homes, he added.

State-run media warned on Thursday that Uighurs would be the “biggest victims” of the Tiananmen Square attack.

Police had refrained from stating the attackers’ ethnicity but the Global Times, which is close to the ruling Communist Party, said that all those involved were Uighurs.

The paper, which often strikes a nationalist tone, called for a “united front against terrorism.”