If only Aquino had said this …

It could perhaps be described as President Aquino’s Nixon moment.

Did President Benigno Aquino III’s communications team not realize that?

“I’m not a crook,” Richard Nixon declared in the ’70s as he rejected allegations related to the Watergate scandal. 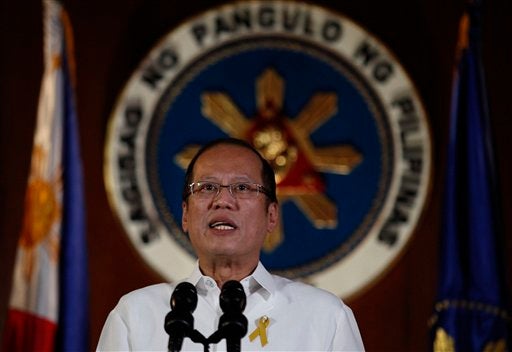 President Benigno Aquino III delivers his speech on national television at Malacanang on Wednesday Oct. 30, 2013. Aquino said officials implicated in a corruption scandal involving the pocketing of huge development funds were muddling the issue to confuse the public instead of addressing the allegations against them. AP PHOTO

Now comes Aquino proclaiming: “I am not a thief.”

As I’ve noted in the past, many Filipinos still believe he is sincere in his desire to eradicate corruption in government. Until recently, they had reason to be hopeful.

But the Napoles fiasco and the other scandals that followed have simply overwhelmed Team PNoy (Aquino). They were silent, then they became defensive. Then they started throwing a fit.

But it isn’t just about theft. It’s about a system that has made theft by trapos, by the country’s elites, so easy to pull off.

But PNoy unfortunately gives the impression that he doesn’t get it — that he only recently discovered the brazen corruption that’s been part of the Philippine politics for generations.

“We were stolen from, we were deceived—and now we are the ones being asked to explain?” he said. “I have pursued truth and justice, and have been dismantling the systems that breed the abuse of power—and yet I am the one now being called the ‘Pork Barrel King?’”

“You have heard what they are saying: That we are all the same,” he said

“We are not the same. I have never stolen. I am the one who goes after thieves.”

There are those who still want to believe that last part. If only he had used a prime time speech to say this:

“The past few months have made it clear that we were right to focus my administration’s energies on a major problem. Corruption is still so entrenched in our political system that even my team and I underestimated how difficult it would be to dismantle it.

“We have made mistakes. The biggest one was not to trust you, the people.

“I’ve always meant it when I say, ‘You are my boss.’ In fact, as my boss, I now understand that you can help me wage this campaign against corruption.

“You have to be involved. And you can be part of this fight if we have a system in which the people themselves can make sure that government is working efficiently and effectively, that every politician, every government official is using the government’s resources responsibly. That every centavo of the people’s taxes is going to projects and programs that serve the people’s needs.

“Information and giving people access to information are key. Which is why I am announcing tonight that I will make passing a Freedom of Information law a priority of my administration.

“I should have done that sooner. But there is still time.

“There are questions about the Disbursement Acceleration Program, and my administration is prepared to answer these and to fix mistakes if there are any.

“It is about a system that is broken. And my goal in the final three years of my term is to fix it.”

Read Next
U.S. Embassy closed on Nov. 1 for All Saints’ Day
EDITORS' PICK
DOH warns vs eating raw meat, exotic animals amid coronavirus outbreak
In appreciation: Kobe Bryant, a life defined by hard work
SM continues to send relief assistance to remote towns in Batangas
Get exciting deals and discounts when you download the new McDonald’s App
‘House of Kobe’ launched in Valenzuela City hours before hoops star’s death
4 Ways Jollibee’s new store will serve a leveled-up kind of joy to Filipinos in the South
MOST READ
Kobe Bryant’s helicopter flew in fog that grounded other choppers
Additional bill calling for ABS-CBN franchise renewal filed in Congress
Crews work to recover remains at site of Kobe Bryant’s crash
Reckless gambit
Don't miss out on the latest news and information.