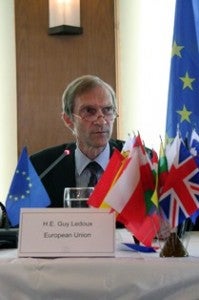 MANILA, Philippines — The European Union is providing P148 million in humanitarian aid to about 350,000 people who lost their homes and livelihoods when a magnitude-7.2 earthquake ravaged Bohol island and nearby provinces in Central Visayas on October 15.

The EU at the same time reaffirmed its commitment to help the country amid the humanitarian emergency, the scale of which prompted the United Nations to issue an international call for aid last week.

“We have seen the destruction and suffering caused by the powerful earthquake. We stand by the people of the Philippines in this hour of need and this EU assistance reaffirms our commitment to immediately respond to the needs of the families affected by the disaster,” said EU Ambassador to Manila Guy Ledoux in a statement.

The quake that struck underneath Bohol on October 15 left 222 people dead, 796 injured and eight missing mostly on the resort island, the National Disaster Risk Reduction and Management Council said in its latest report Thursday.

The EU said the amount would go toward sustaining the delivery of emergency relief to affected areas, Bohol province in particular, which has still been needing temporary shelter, water, sanitation and health care facilities. The fund would also be used for the management of evacuation sites, the EU said.

Of the close to 350,000 displaced people, about 80 percent are living in makeshift shelters and evacuation centers, EU said.

Earlier, the Japanese government donated P16.7-million worth of relief supplies for the quake victims.

The donation was made through the Japan International Cooperation Agency in heed of the UN call for aid to the Philippines.

“On October 29, the government of Japan decided to extend emergency relief goods (tents, plastic sheets etc.) worth 38 million yen (approximately 16.7 million pesos) to the Republic of the Philippines through the Japan International Cooperation Agency (JICA),” the Japanese Embassy in Manila said in a statement.

“In the face of the serious damage and in light of the strong bond existing between Japan and the Philippines as strategic partners, the government of Japan made this decision to extend emergency assistance for humanitarian aid for those affected,” said the embassy.

The UN launched an action plan for quake-hit Visayas on Thursday, appealing for international aid amid the scale of emergency needs of some three million people affected by the temblor, including at least 350,000 displaced.

The United States, India, China, Taiwan, South Korea and Malaysia have extended aid to the Philippines.

The European Union said its donation would be funneled through its Humanitarian Aid and Civil Protection (ECHO) department, which was among the first international bodies to do a needs assessment in affected areas immediately after the quake.

It has sent two humanitarian aid experts – a regional health coordinator from Bangkok and a humanitarian aid officer based in the Philippines – to severely hit Calape, Maribojoc and Loon in Bohol to check on the urgent needs of the quake survivors, Ledoux said.

“During their visit, the experts noted that most of the houses had collapsed and that access to services was difficult. Primary health care and potable water supplies were also limited because water pipes had broken,” the EU said.

EU is one of the biggest providers of humanitarian assistance to the Philippines.