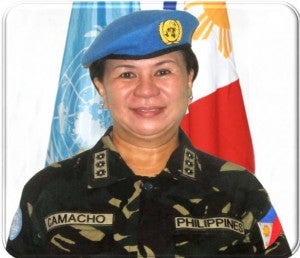 MANILA, Philippines — For the first time, a female military officer will lead the Philippine contingent to a peacekeeping mission of the United Nations.

Captain Luzviminda Camacho, commander of the 17th Philippine Contingent to Haiti, will lead the 157-strong officers and personnel to the UN mission of up to nine months. She is the first female to lead Philippine contingents for the UN. They will be sent off at Villamor Airbase in Pasay on Tuesday, October 29.

She was also the first female to be a commanding officer of a Navy ship. When she had a rank of Commander, she led the BRP Manuel Gomez (PG 388), a patrol gunboat, in the areas of Davao and General Santos from 2008 to 2009.

They are expected to serve from six to nine months.

The Philippines also sends its peacekeeping forces to Liberia and Golan Heights.

In the Know: 730 Filipino peacekeepers posted in 9 UN missions