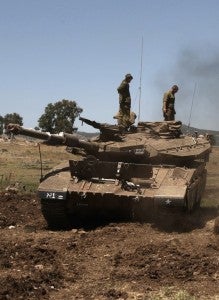 Israeli soldiers stand on top of a Merkava tank stationed in the Israeli annexed Golan Heights near the border with Syria on May 26, 2013. A former commander of UN peacekeeping troops in the Israeli occupied Golan Heights has warned that the entire force would be in jeopardy if Austria withdraws. Austria — which provides the largest number of troops to the UN Disengagement Force (UNDOF) on the Golan — has threatened to withdraw its troops over concerns for their safety if the EU lifts an embargo on supplying arms to the Syrian opposition. AFP PHOTO/JALAA MAREY

MANILA, Philippines – A Filipino peacekeeper of the United Nations was wounded when he was hit by “a wayward indirect fire” at Camp Ziouni in ceasefire line Golan Heights on Thursday, the military said.

Lieutenant Colonel Ramon Zagala, Public Affairs Office chief of the Armed Forces of the Philippines, said the soldier, whom he declined to identify, is a member of the Philippine Contingent to Golan Heights. He was hit by shrapnel just above his right ankle.

He is now being treated by medics inside a shelter and is in “stable and good condition.”

The incident happened during a firefight between Syrian government and rebel forces, some three to four kilometers from Camp Ziouni.

Camp Ziouni is the logistics base of the United Nations Disengagement Observers Force where the different peacekeeping missions are based. Some 300-plus Filipino peacekeepers are part of the 1,000-strong mission.

“The AFP continues to monitor the situation in the area; likewise we assure that the safety and well-being of our peacekeepers will remain a priority,” Zagala said.