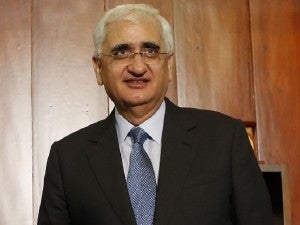 MANILA, Philippines—India has expressed its support for a peaceful resolution to the territorial conflict in the West Philippine Sea (South China Sea), adding it hoped the Philippines’ arbitration bid would prosper and lead to the stability of international waters.

“India has very clearly stated our position of support for free access to sea lanes and, of course, international law, the Unclos (United Nations Convention on the Law of the Sea) being the basis of peaceful resolution of any such disputes,” visiting Indian External Affairs Minister Salman Khurshid said in a forum in Manila.

The visiting Indian minister explained India’s position in response to questions following his lecture on India’s foreign policy at the Department of Foreign Affairs (DFA) on Tuesday afternoon, the second day of his first official visit in Manila.

“[A]rbitration is one answer. I hope it works. But at the end of the day, whatever the institutional response is … it is the will of the people of the region that is very important, and that will of the people of the region is there should be a peaceful resolution,” said the official, when asked about his take on the turf issue between Manila and Beijing.

China has rejected arbitration citing its “indisputable sovereignty” over the waters. It was also against internationalizing the issue, saying this was a bilateral issue between the two countries.

India, as an outsider in the conflict, will not assume a role in the Manila-Beijing tension, Khurshid said. Foreign Secretary Albert del Rosario had briefed him on the matter on Monday, the first day of the latter’s two-day stay in Manila.

“We don’t interfere. Anything that is a bilateral issue must be settled by the two countries and there is no place for a third country to intervene, even as a friend,” said Khurshid, adding that India has an important relationship with both the Philippines and China.

Manila and Beijing are contesting ownership of the potentially oil-rich territories in the West Philippine Sea, a critical international trading lane where some $5.3 trillion worth of trade pass through annually.

Saying all attempts at dialogue had failed, Manila brought its case to the United Nations Arbitral Tribunal in January, questioning Beijing’s nine-dash line that encompasses almost all territories in the South China Sea, including those in the West Philippine Sea.

The tribunal, holding court at The Hague, took note of Beijing’s objection to arbitration but has continued the process. Last September, it gave Manila six months to file its pleading tackling the merits of its case against Beijing.

Khurshid spoke in Manila as India’s Prime Minister visited Beijing to ease continuing tension on the Himalayan border between the two countries.

Khurshid cited India’s own experience in looking for a solution to its border dispute with China, which resulted in “something very ugly” in 1962, when war ensued between the two countries over the Himalayan delineation.

He said both New Delhi and Beijing continued to pursue its bilateral relationship outside of the border conflict—an approach that Manila had also taken in dealing with China.

In his lecture, the inaugural talk under the DFA’s Rizal-Nehru Memorial Lectures series, Khurshid cited how the Philippines could take advantage of its strategic location in the Asia-Pacific and also could serve as an international window toward Central Asia.

“If you would only see yourself in that important geographic position, you would not be only an important collaborator but also a major hub as far as the world is concerned,” said Khurshid.