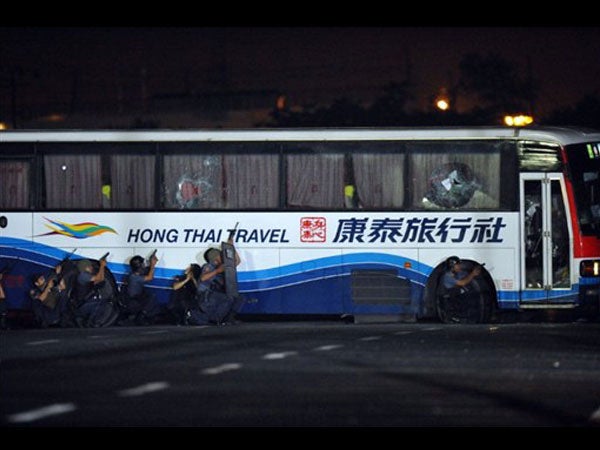 MANILA – Manila Mayor Joseph Estrada will formally apologize over the deaths of eight Hong Kong tourists in a 2010 hostage crisis, an aide said Wednesday, despite President Aquino insisting none should be given.

Estrada, a graft-tainted ex-president who was elected mayor of Manila in May, will go to Hong Kong this week to present the apology in the form of a resolution passed by the city council, a city official said.

A formal apology has been one of the long-standing demands by the Hong Kong government over the deaths of the eight tourists in Manila in August 2010 after they were taken hostage by a disgruntled Filipino policeman.

“There is an admission of a bungled operation. The city of Manila is being more candid now,” Luch Gempis, secretary of the Manila city council, told AFP.

Philippine authorities have acknowledged that police and other authorities mishandled the hostage situation.

But President Aquino has consistently refused to make a formal apology on behalf of the national government, insisting the deaths were primarily caused by the actions of the hostage taker.

The lack of an apology, as well as a refusal to pay compensation, has caused deep tensions between Hong Kong and the Philippines.

Aquino reiterated on Wednesday that no national government apology would be given.

“The act of one individual should not be construed as the act of the entire nation,” he said, adding a formal apology could have legal ramifications that led to compensation.

Gempis denied the apology was intended to embarrass Aquino, who is a political rival of Estrada’s. He also insisted it was not targeted at Alfredo Lim, another rival who was mayor of Manila when the hostage incident took place.

“The principal purpose of the resolution is to end the controversy, to have closure,” he said.

Estrada is a former movie star who translated his on-screen popularity into becoming elected president in 1998.

But he was toppled half way through his six-year term in a people’s uprising over corruption allegations for which he was later convicted, and then pardoned.

He has since made a remarkable political comeback, finishing second to Aquino in the 2010 presidential elections, then winning the Manila mayoral race this year as a member of the main national opposition coalition.