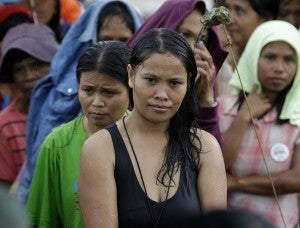 Residents queue up under the rain to receive relief supplies at quake-hit Sagbayan town, Bohol province in central Philippines Thursday Oct. 17, 2013. More countries and international agencies expressed solidarity with the Philippines on Thursday as the number of fatalities and infrastructure losses in the 7.2-magnitude earthquake that shook provinces in the Visayas rose. AP PHOTO/BULLIT MARQUEZ

More countries and international agencies expressed solidarity with the Philippines on Thursday as the number of fatalities and infrastructure losses in the 7.2-magnitude earthquake that shook provinces in the Visayas rose.

The United Nations’ World Food Programme (WFP) has “prepositioned stockpiles” of 1,000 metric tons of rice, 15 MT of high-energy biscuits and nonfood items, such as generator sets, tents and mobile offices to the disaster areas in Cebu and Bohol, its Office for the Coordination of

Spain, New Zealand and Canada sent messages of sympathy and solidarity to the Philippines through their embassies in Manila.

In Malacañang, President Aquino’s spokesman, Edwin Lacierda, said the government would welcome international assistance, but added: “Certainly, we will appreciate. We are not calling out for aid but … you know, no man is an island.”

“And if there’s help, why should we refuse it? Certainly, we appreciate international assistance, but we just want to categorically say that we have enough resources to handle the situation,” Lacierda said.

The Spanish government cited in particular the destruction of churches built during the Spanish colonial era. “The earthquake has also caused damage to historical heritage of the Spanish period in the country,” it said.

“On behalf of the Spanish people, the government conveys its most sincere condolences and sympathy to the authorities and the Filipino people and, particularly, to the families of those affected and hopes for the early recovery of those injured,” the message read.

Prime Minister John Key of New Zealand, which is in the so-called Pacific Ring of Fire like the Philippines, expressed “heartfelt sympathies” in a letter to President Aquino.

“New Zealanders can well relate to this very traumatic experience, having themselves suffered major earthquakes in recent times,” said New Zealand Ambassador to the Philippines Reuben Levermore. He cited the earthquakes that shook Christchurch town in February 2011 and the Kermadec Islands last month.

“Canada continues to closely monitor events in the region and stands ready to provide emergency consular assistance to Canadian citizens as required. Canada stands in solidarity with the people of the Philippines during this difficult time,” Baird said in a statement sent through the embassy in Manila.

Malacañang on Thursday said that it was considering asking foreign experts to help restore the centuries-old churches in Bohol province that were destroyed by a 7.2-magnitude earthquake on Tuesday.

Lacierda said Bohol, the epicenter of the earthquake, thrived on tourism and one of its attractions was its old churches, some of which were built during Spain’s colonial rule in the Philippines.

Among those churches is the 180-year-old Our Lady of Light Parish Church in the coastal town of Loon, which was completely destroyed by the earthquake.

Lacierda said the government would need advice from foreign experts to restore the churches, but said the work would have to wait, as the government’s priority was providing relief to the thousands of people in Bohol who lost their homes in the earthquake and were being sheltered in evacuation centers.—Reports from Tarra Quismundo and Michael Lim Ubac