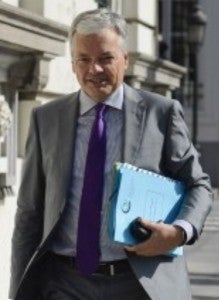 BRUSSELS—The European Union has a “vital interest” in a secure and open maritime trade routes even as it expressed alarm at the escalating tension in the South China Sea.

“As far as maritime security is concerned, I strongly believe that the EU has a vital interest in a securre, open and clean maritime environment that allows the free passage of commerce and people,” said Belgian Foreign Minister Didier Reynders at the opening Tuesday of the EU-Asean forum on regional integration here.‎

Viewed in Asia as a “soft power”,  Reynders said EU needs to assume a global role as a “force of stability.”‎

“The EU should come to the defense of the peaceful, legal, fair and sustainable use of the oceans’ riches,” he said before Asean officials and members of the diplomatic community in Brussels.‎‎

“Maritime flows represent the lifeblood of European trade and the high seas are conduits of European prosperity and influence,” said Reynder.  “Our institutions should therefore be further developemed in order to provide for the objectives, means and capabilities necessary to meet that responsibility.”

He underscored the need for countries to resolve overlapping territorial claims within the framework of the United Nations Convention on the Law of the Sea and prevent maritime rows from escalating into a full-blown conflict.

“We wish to promote the universality of this Convention and to insist on  the need for uniform and consistent implementation of its provisions,” Reynders said.

“Together with Asean we should consider all diplomatic attempts to prevent states which are unwilling to cooperate with the international community, which do not abide by international treties and standards and which have the geographical position to block trade routes to do so, in order to engage with them in dialogue and cooperation,” he said.

‎Territorial disputes between China and some Asean countries like the Philippines and Vietnam center on Beijing’s  claim over most of the South China Sea, which Manila officially calls West Philippine Sea. ‎