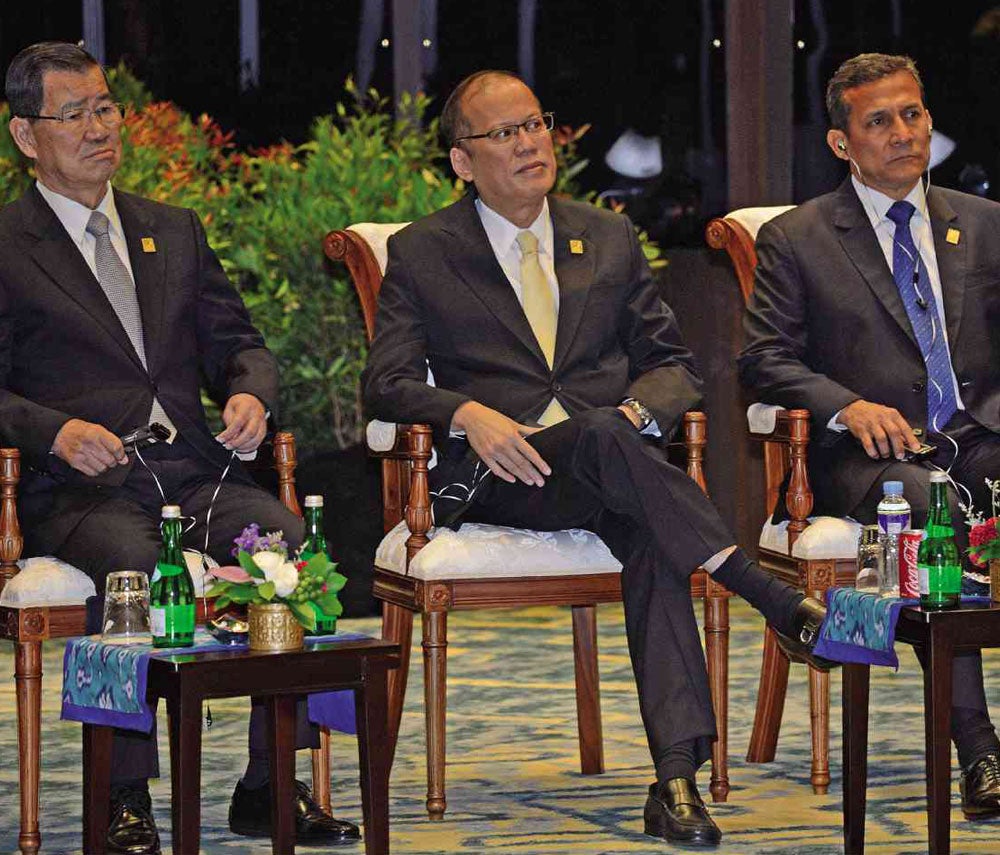 BUSINESS TALKS President Aquino, flanked by Taiwan’s former Vice President Vincent Siew and Peruvian President Ollanta Humala, takes part in a dialogue between leaders of the Asia-Pacific Economic Cooperation (Apec) forum and businessmen from the region on the first day of the 21st Apec Summit in Bali, Indonesia, on Monday. ROMEO GACAD/AFP

Reporters from Now TV, Radio Television Hong Kong and Commercial Radio asked Aquino as he walked past them at Bali International Convention Center shortly before 2 p.m. on Sunday if he would meet Hong Kong Chief Executive Leung Chun-ying and apologize to the families of the victims.

“Will you apologize to Hong Kong people for the real tragedy?” a woman reporter asked, TV footage posted by the South China Morning Post showed.

“Will you give an answer? It has been three years,” she said.

“So you are ignoring Hong Kong people, right?” another reporter asked.

Aquino did not reply to their questions. Now TV footage showed an Apec staff member telling the reporters, “You ambushed one of our visitors.”

The Now TV video showed another Apec staff member telling one of the reporters: “You know that the decency [includes] no screaming. You do understand that?”

The reporter is heard answering, “I am asking, I’m not screaming, OK?”

The staffer went on to tell him, “Now out!”

The journalists were not thrown out of Bali, but they could no longer cover the rest of the Apec meeting.

Hong Kong’s press association protested the eviction of the journalists, but Aquino’s Communications Secretary Ricky Carandang said the reporters had crossed an ethical boundary by aggressively questioning the President about the hostage siege.

“As a former journalist, I know what it’s like to aggressively question a subject,” Carandang said.

“The behavior of those reporters crossed the line from mere questioning to heckling and was construed by Indonesian security personnel assigned to the President as a potential physical threat to him so they took what they believed was the appropriate action,” Carandang told reporters.

“He was accosted very rudely and very aggressively by a number of people claiming to be journalists from Hong Kong. Indonesia security deemed it to be aggressive and they took action to prevent them getting too close to the President,” he said.

Eight Hong Kong tourists and their guide were killed on a tourist bus hijacked on Aug. 23, 2010, by dismissed Senior Insp. Rolando Mendoza of the Manila police in an attempt to get back his job.

The daylong siege that was shown on television around the world ended in a botched police rescue in which the tourists, their guide and Mendoza were killed.

Aquino has expressed regret over the bloodshed, but repeatedly said he considers the issue closed and that it was not appropriate for the Philippine government to apologize because the state was not responsible.

Manila Mayor Joseph Estrada has apologized for the deaths, but relatives of the slain tourists have continued to press for an official apology and compensation.

Sham Yee-lan, head of the Hong Kong Journalists’ Association, said the Philippine government had “yet to provide a satisfactory explanation” for why the eight tourists had died in a botched police rescue and that the reporters in Bali were doing their job.

“The barring of the media for asking critical questions is an outright infringement of press freedom that is totally unacceptable,” Sham said in a statement.

“We deemed it improper for [journalists] to act that way, as they didn’t talk normally but they were very demonstrative, like they were protesting,” said Gatot Dewa Broto, the Indonesian communications ministry official who is in charge of the Apec media center in Bali.

He called it a glitch in the President’s bigger task here: to trumpet Philippine economic gains and attract more investors, while helping ensure that Apec achieves its goals.

Apec aims to establish free and open trade and investment among developing economies belonging to bloc by 2020. A similar deadline was set for industrialized economies in the region three years ago.

With Indonesia hosting this year’s summit, the objective is to “ensure that the Asia-Pacific region maintains robust economic growth and resilience, and is able to swiftly recover from shocks and contagions from other regions.”

One such shock could come from the world’s biggest economy, the United States, which enters its second week of a government shutdown on Tuesday.

Coupled with a crucial Oct. 17 deadline to raise debt ceiling, the budget standoff has forced US President Barack Obama to skip the Apec meeting here, the East Asia Summit in Brunei on Wednesday and Thursday and visits to the Philippines and Malaysia later this week.

With the Philippines acknowledged as Asia’s fastest-growing economy, Carandang said President Aquino was focused on attracting more foreign investment in a bid to achieve inclusive growth.

“We have very stable macro-economic fundamentals, low inflation, low interest rates, steady growth, and so we can provide a stable environment for investors to grow their businesses,” he said. “So that’s been our general pitch.”

Aquino on Monday joined other Asia-Pacific leaders in a “dialogue” with members of the Apec Business Advisory Council (Abac) and in a retreat, which tackled the organization’s “role in strengthening the multilateral trading system in the current global economic situation.”

The Philippines is represented on the Abac by Doris Magsaysay Ho, Tony Tan Caktiong and Jaime Augusto Zobel de Ayala.

In its official report to Apec economic leaders, the council expressed concern over “the continuing uncertainty that pervades the global economy, including the volatile capital inflows and unstable financial markets in the Asia-Pacific region.”

“There is still much to be done to underpin the resilience and openness of our economies so that our region can become a more secure engine for global growth,” the council said.

The Abac called for “major infrastructure investment across Apec,” but noted that member economies “will not be able to fund the region’s massive infrastructure deficits without private sector investment.”

“We need to utilize more Apec savings and develop more innovative financial arrangements,” it said, pointing out that “the lack of ready infrastructure projects and slow implementation of public-private partnerships (PPP) are a real concern to investors.”

Such partnerships are a major component of the Aquino administration’s drive toward inclusive growth.

But the program has been criticized for its relatively slow implementation.

The Philippines’ neighbors, among them Thailand, are far ahead in infrastructure development.

“Well, look at it this way. Because our infrastructure needs are probably greater than, [let’s] say, some of the other neighbors’, that means that the opportunity to build infrastructure in the Philippines is also broader,” Carandang said

“Ours still needs developing, so in terms of the potential market that we have for infrastructure projects, there’s more there,” he said.

Carandang said the Philippines was “not necessarily competing” with its neighbors for prospective foreign investors.

“There’s a lot of money to go around,” he said. “There’s enough investors out there to come in. So, we view this as not necessarily ‘Come to us, don’t go to them.’ We view this as, ‘If you’re going to be in the region, anyway, come to us because it’s a good place to be.’”

The Apec leaders on Monday urged faster work on reforms meant to break down trade barriers and improve competitiveness.

But their summit meetings were not all work and there were some light moments.

With Obama not around, Japanese Prime Minister Shinzo Abe urged faster work on reforms and pledged to move ahead with changes he had promised as part of his “Abenomics” economic strategy.

“It’s not easy for a country stuck in deflation for 15 years to get out,” Abe said.

But he promised measures to ensure that an increase in Japan’s sales tax, which had driven consumer confidence to record lows, does not derail the economic recovery he has nurtured since taking office last December.

“Now we can wipe out the doom and gloom atmosphere in the Japanese economy,” Abe said.

Speaking to a gathering of business and political leaders, Abe also sought to reassure other Asian countries, especially those that suffered colonization and invasion before and during World War II, over Japan’s efforts to upgrade its military.

“We are aspiring to become a proactive contributor to stability and security in the world as a country that observes international norms,” Abe said.

The reference to international norms appeared aimed at China, whose naval incursions into waters near disputed islands in the East China Sea have angered Japan.

Relations between the two biggest Asian economies remain chilly with scant signs either is willing to compromise on the islands dispute.

Apec’s 21 nations and territories have wide disparities in wealth and development, ranging from tiny Brunei to the United States and China, the world’s two biggest economies.

The region accounts for more than 3 billion people and over half of global gross domestic product.—With reports from AP and AFP