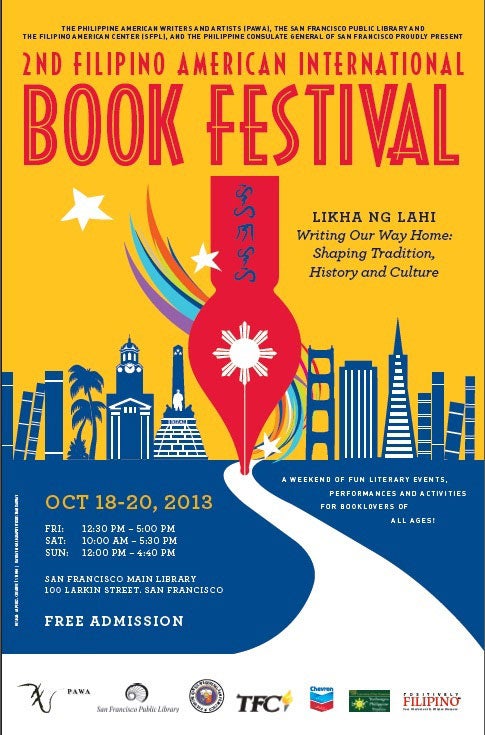 The theme of this year’s literary event is “Likhâ ng Lahi” (Literature of the People): Writing Our Way Home.”

Filbookfest II will once again showcase the richness of Philippine culture through books, the visual and culinary arts and music.

The highly successful Filbookfest I, also held at the San Francisco Main Library in 2011, earned a Certificate of Honor from the City and County of San Francisco for being a milestone event for the Filipino-American community.

The three-day festival will open in the afternoon of October 18 with three film documentaries based on award-winning books written by prominent artists from the Philippines.

Musician and writer Richie Quirino will be present for the screening of his documentary about Filipino jazz based on his award-winning book Pinoy Jazz Traditions.

Also coming from Manila, noted film historian, director and author Nick Deocampo will present two of his documentaries, one on Spanish influences in early Philippine cinema and another on American influences, based on his highly regarded books.

Saturday and Sunday will feature award-winning authors and artists from the Philippines and the US such as Evelina Galang, Marivi Blanco, Luisa Igloria, Jon Pineda, Lysley Tenorio and artist/author/chef Claude Tayag.

In “Hot Off The Press,” published authors will read from their most recent books. In addition, there will be storytelling for children, teens reading their poetry and panels and lectures on a variety of topics including self-publishing, DIY audience building for writers and artists, endangered Philippine species, and on Carlos Bulosan, one of the revered pioneers of Fil-Am literature.

The library events will close with a balagtasan, a poetic debate/joust that is unique to the Philippines and was a big hit in the 2011 book festival.

Throughout the festival, books will be available for purchase at the Latino/Hispanic Community Meeting Rooms where authors will also sign their works.

Supporters of the festival such as the University of San Francisco, Chevron, San Francisco Filipino American Jazz Festival, FANHS and other organizations will also be participating.

FilBookFest II is presented by the Filipino American Center of the San Francisco Public Library, in conjunction with Philippine American Writers and Artists (PAWA) and the Philippine Consulate General of San Francisco.